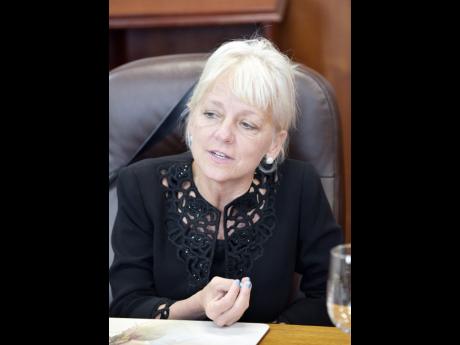 Unbearable heat occasioned by a power outage that rendered the central AC unit in Parliament inoperable yesterday led to the stopping of a committee meeting even as the head of the Jamaica Public Service (JPS), Kelly Tomblin, and a number of government technocrats waited to make presentations on plans to boost the country's capacity to provide more efficient energy.

The Economy and Production Committee of Parliament had invited stakeholders to appear before the committee.

Permanent Secretary in the Energy Ministry Hilary Alexander and her team, as well as members of the Office of Utilities Regulation, the JPS, and the Petroleum Corporation of Jamaica were all scheduled to make presentations to the committee.

However, minutes after members of the committee selected Fitz Jackson to deputise for Anthony Hylton, who had not shown up, the power supply was interrupted.

St Thomas Western MP James Robertson made it clear from early in the meeting that the committee should halt its sitting because the room was too hot. "...We should stop where we are because I can?t do any work in this heat today. It's is not fair to our guest."

Jackson said he would consider Robertson's proposal but argued that it might be premature to end the meeting at the time the suggestion was made.

The acting committee chairman was advised that the Parliament was running on its standby generator and that it could not power the central AC system in the chamber.

No fault on JPS line

President and CEO of the JPS Kelly Tomblin told the committee that a technical team from her company had carried out external checks and found no fault on the JPS line, adding: "They are actually in your meter room right now trying to see if there is a problem inside your perimeter."

The committee chairman suspended the meeting twice to determine if the problem could be rectified.

However, Robertson said he was told by the JPS staff that it was low voltage coming into the system at Parliament.

"I would want to indicate that what we have been told is that it is a low-voltage issue coming into the building, and that is coming from the JPS staff that went into the panel box," he said.

Committee member Rudyard Spencer was clearly peeved by the events that had disrupted the meeting. "It would be remiss of me not to mention ... these people are here - and certainly JPS and the ministry at tremendous sacrifice - and it doesn't augur well for the committee not to have its hearing. I am hoping the next time we meet, this will not happen again."

The committee meeting was then brought to an end but not before it was disclosed that the chairman, Anthony Hylton, said he had recorded in his diary that the meeting was at two in the afternoon.