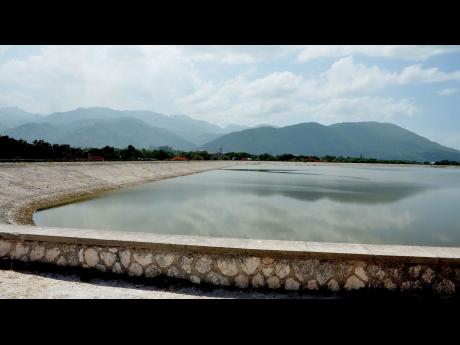 File
This 2014 file photo shows the Mona Reservoir which has the capacity to hold 800 million gallons of water, with only 280 million gallons due to the drought that was affecting the country.

The National Water Commission (NWC) is reporting that it is in a much better position now than it was in the last two years to supply water to its customers, with most of its sources having 80 per cent capacity levels.

Last year, the NWC reported that storage levels had dropped to as low as about 20 per cent and 25 per cent at the Mona Reservoir and Hermitage Dam, respectively.

Corporate Public Relations Manager Charles Buchanan told The Gleaner yesterday that as the country goes through its dry period, extra precautions need to be taken, despite the improved water levels.

"Our experience from a hydrological drought condition as it relates to flows from our facilities, broadly speaking, we are in a better position. There may be a few facilities out of the 460 systems that we have that may still be experiencing slight challenges, but there has been improvement at most of our sources," he said.

"Mona and Hermitage being the main sources are among those that have experienced improvement. We are now having 80 per cent storage levels at both of those large facilities. We would always hope that we were at 100 per cent levels, especially due to the fact that our secondary highest rainfall period ended last month," he declared.

"You would've wanted a scenario where coming out of May/June, you remain at maximum levels for as long possible going into the drier period. We are doing our monitoring, however."

The NWC is warning, though, that with the variations in climate change, it is becoming difficult to put certain plans in place and is, therefore, urging citizens to conserve.

Buchanan said there are few lock-offs, which usually happens at this time of the year.

"Customers may experience in some areas of the Corporate Area either low pressure or no flow during the night-time when in most cases water usage is significantly less. That's normally the case at this time of the year, depending on where you're at."