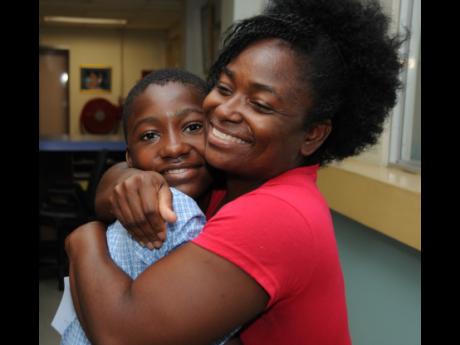 Jermaine Barnaby
Twelve-year-old Ricque Fullerton and his mother, Racquel Fullerton, embrace in celebration after receiving the go-ahead from the Ministry of Education for Ricque to get a second chance at sitting the Grade Six Achievement Test. Ricque fell ill and was unable to complete the examination last March.

The mother of a 12-year-old boy who fell ill during the first paper of the Grade Six Achievement Test (GSAT) last March, and was unable to continue, has been overtaken with joy at news that the Ministry of Education will be giving her son another chance at sitting the examinations.

The Ministry of Education has finished reviewing Ricque Fullerton's case and has granted him the opportunity to get his fair chance to do the exams but at a different school, as requested by his mother, Racquel Fullerton.

"I am so happy! I can't stop screaming!" the elated mom said.

"I'm overwhelmed, I'm excited, I'm blessed, and I'm really grateful. I'm thankful for this because I get so much discouragement from people around me, to let it go and to send him (to an all-age school). I'm pleased. Now, I can sleep. I know that (for) him also, it's a relief," she told The Gleaner as she examined a letter from the ministry, which was to be taken to her son's new school.

Fullerton attended a meeting with Chief Education Officer in the Ministry of Education Dr Grace McLean earlier this month, where she was asked to say what her expectations were. She told McLean that she wanted to see her son repeat grade six and for him to get another chance to sit GSAT.

The request was granted.

One issue that was raised that could have denied him the opportunity was whether he was eligible by age.

"The stipulation for GSAT is that a student can sit between the ages of 10 years and eight months and 13 years, in accordance with our code of regulation, and so there are a specific numbers of years, a three-year period, that students are allowed to sit," McLean had said.

"We have special allowances for students who are older. Once they have passed 13 years and they are considered normal students, then it is outside of the regulation for them to sit."

Ricque will turn 13 years after the next sitting of GSAT, which means he is eligible.

His mother has vowed to put in the extra work required on her part to ensure that her son proves to everyone that the ministry was right in giving him a fair chance.