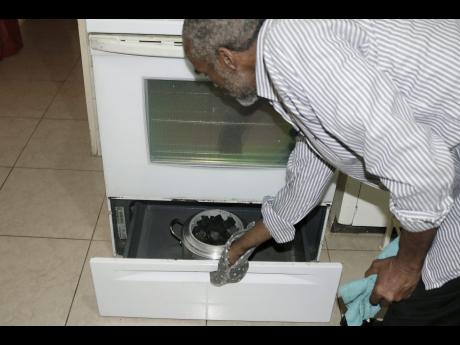 Christopher Serju
At first glance one could easily mistake this coal stove for a pot. The stove comes with a container in which the methylated spirit is placed and lit and which then goes on to ignite the coal. This eliminates the need for using pieces of plastic, cardboard, wood chips and various other material which are often unreliable and definitely not environmentally friendly. George Allen demonstrates the use of the new coal pot stove to bake in a regular gas stove which has been modified. Depending on the amount of cooking required, he sometimes uses two stoves, easily achieving baking temperature in excess of 400 degrees Fahrenheit. By removing the top grille and putting the pot back on the stove, this effectively caps the flames which results in the coals going out in short order. 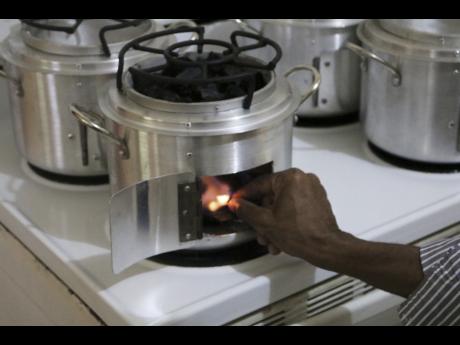 Christopher Serju
At first glance one could easily mistake this coal stove for a pot. 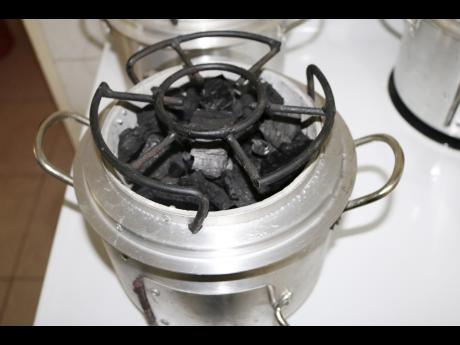 Christopher Serju
At first glance, one could easily mistake this coal stove for a pot. 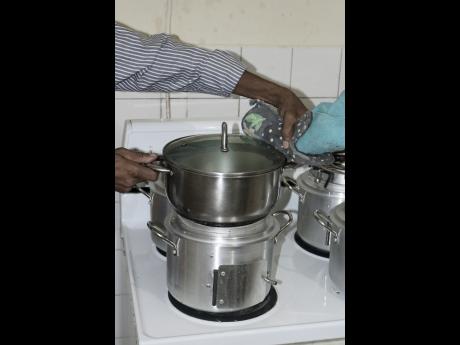 Christopher Serju
The method used for putting out the coal stove.
1
2
3
4

A pensioner with a lot of time on his hands is how George Allen describes himself when asked about his revolutionary redesign of the traditional coal stove, which has been a staple in Jamaican households for decades.

'The Improved Coal Pot Stove', which the inventor claims was designed to utilise coal more efficiently, and which allows for regulation of the rate of combustion, is much more economical and user-friendly and has been endorsed by the Bureau of Standards Jamaica (BSJ).

"In the submitted application, a new design of the traditional single-burner charcoal stove is proposed. The applicant claims that the proposed design is more easily lit, more environmentally friendly, and more energy efficient than the traditional design.

"After an examination of the specification, it was determined that the proposed design is one that is of practical utility that addresses the aforementioned challenges faced when using the traditional design," the BSJ wrote in a letter to the Jamaica Intellectual Property Office (JIPO).

Since then, the JIPO has advised Allen to proceed with his patent application, based on the endorsement of the BSJ.

"We make reference to the letter dated March 16, 2016, from the Bureau of Standards Jamaica, where the recommendation has been the grant of the application. Please, therefore, submit the publications from the Jamaica Gazette and the daily newspaper to complete the processing of this application," it wrote in part.

The Improved Coal Pot Stove puts an entirely new spin on cooking with a coal stove, given its lightweight, more environmentally friendly design, using, as it does, methylated spirit as the lighter fuel and a lot less coal for cooking, as The Gleaner observed during a recent demonstration.

"The stove is extremely user-friendly. It uses methylated spirit to ignite the flame, as a result of which fewer carbon emissions because it burns quite cleanly and is also user-friendly. So, in fact, during the burning of the coal, or the ignition of the coal, very little carbon emission occurs. The stove is supplied with a container within which the methylated spirit is placed. The spirit is placed in the container and placed into the core of the stove and then lit, and it will take approximately five minutes for the coal to be ignited, or for it to be fully developed," Allen explained during the demonstration.

It looks nothing like the traditional coal stove, and, at first glance, could be mistaken for a regular aluminium pot.

Fitting as it does easily on top of a regular gas stove, the new coal stove fits into the aesthetics of your kitchen, and even when lit and operational, offers very little of the bother associated with its predecessor.

"It is, by far, superior to the traditional," Allen declared, pointing out that a pound of charcoal could easily cook a meal based on the built-in efficiency.

"Among the features of my stove is a grill that supports utensils (pots). It also has a specially designed charcoal grill, which allows air to flow rapidly through the burning coal stove, which enhances the rate of combustion."

When the meal is almost cooked, the pot is taken off, the lid removed, and the pot replaced atop the stove, effectively cutting off air supply to the burning coal, which then goes out soon after.

Given the cost-saving factor, Allen has now ceased using liquefied petroleum gas, has modified his gas stove to facilitate baking in its oven, using two of his stoves to bake anything from chicken to fruit cake.

He explained: "When the coal is fully developed (burning), it is placed in this section of the stove, and there is an oven thermometer, which I use to note temperature of the stove and make adjustments to the volume of air going into the stove so that I can bake at the required temperature.

"To bake a Jamaican traditional fruit cake, that requires a temperature of about 2508Fahrenheit. To bake a normal bun, that would be about 3608Fahrenheit," he said.

"I have used the stove to also bake chicken. That temperature will go up to roughly 360-4008Fahrenheit. So, in fact, I have been able to achieve temperatures in excess of 4008F with the stove; but to attain that temperature it would require that I use two stoves in my oven for the purpose."

Having sold a number of the stoves, the enterprising Jamaican says the response has been overwhelmingly positive and he would like more people to benefit from using it.

"If there is an entrepreneur interested in purchasing the patent, I would be willing to sell it in order to facilitate mass production and also to enhance the efficient use of charcoal because what I've found out is that people in the lower-income category rely heavily on the charcoal. Unfortunately, the method they use for utilising the stove is not energy efficient. They are purchasing coal in small quantities, but it is costing them dearly."