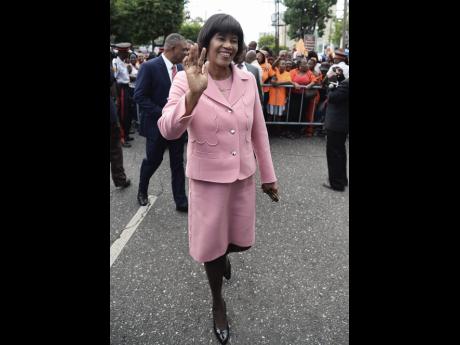 After declaring liquid assets amounting to approximately $15 million in her latest submission to the Integrity Commission of Parliament, Portia Simpson Miller has said that her primary purpose in politics has been to "uplift and advance the lives of our people, never personal enrichment".

Responding to a question on her current financial worth as reported to the Integrity Commission, after 40 years as a parliamentarian, Simpson Miller told The Gleaner, in an emailed response, that "all my life I have worked hard and lived within my means. I came into politics with very little and the assets I have acquired were through savings and sticking to a modest lifestyle."

Said Simpson Miller: "Politics for me has always been about service, nothing else."

Following calls from various quarters for her to release her integrity returns to the public, Simpson Miller a senior politician of 40 years, who is married to the former CEO of Cable & Wireless, Errald Miller, yesterday unveiled documents to the media for the last 10 years.

Simpson Miller, who entered representational politics in 1976, reported the purchase price of a Tavistock property in upper St Andrew amounting to $58,000. The current value of the property is not known and the reports over the 10-year period have not divulged that information.

The opposition leader's statutory declarations have showed no liabilities.

In 2006, Simpson Miller's submission to the Integrity Commission showed the sum of nearly $5 million.

Simpson Miller is the third parliamentarian in recent times to release information on her income and assets.

Earlier this year, Prime Minister Andrew Holness revealed that he had assets of US$415,026 and J$99.3 million, approximately J$152 million in total, and liabilities of J$34.4 million.

Simpson Miller's records showed that she was reported to the 'parliamentary leaders' in January 2008 for not presenting her statutory declaration on the due date.

The Integrity Commission said Simpson Miller was not reported on any other occasion for breaching the Parliament (Integrity of Members) Act.

Giving an explanation for her single late reporting, attorney-at-law for the opposition leader, Patrick Atkinson, QC, said that each parliamentarian was required to submit a report to the Integrity Commission at the end of March for the previous year. However, he said if a general election is held within the year, parliamentarians are required to submit a second report to the oversight body. The election was on September 3, and the declaration was due in December and it was just late that year, said Atkinson, who noted that a number of parliamentarians were late in making their second submissions.

"The role of the Integrity Commission is to look at the documents submitted by the MP to see if there is anything remarkable, any sudden changes or any increases that raise an eyebrow," the attorney pointed out.

Atkinson told The Gleaner that in the case of Simpson Miller, there was no red flag in her report, but there was a level of consistency over the years. "You can see that she is a suffering politician like the rest of us," Atkinson quipped.