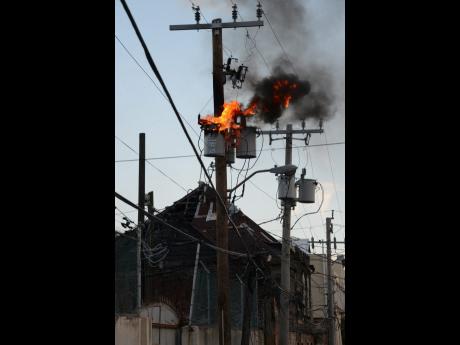 Ian Allen
A transformer on fire along Mark Lane in the vicinity of Gordon House yesterday.

At least one lawmaker says a fire near Gordon House - Jamaica's Parliament building - yesterday should be a wake-up call to the authorities, especially the Jamaica Public Service Company (JPS), to revisit systems of response to sensitive locations.

The House of Representatives was sitting yesterday afternoon when sometime after 5:15, Marshall Kevin Williams reported to the speaker of the day, Franklyn Witter, that a transformer beside the building on Mark Lane was on fire. The sitting adjourned shortly after.

A unit from the Rollington Town Fire Station responded within five minutes, but it took at least another 20 minutes for the fire to be extinguished as the firefighters had to wait on the JPS team.

"There has to be a more timely response. In fact, 20 minutes was a long time. So much damage could have been done during that wait period," Edmund Bartlett, the East Central St James member of parliament, told The Gleaner.

Sergeant Bertram Taylor, who led the firefighting team, said the length of time it took for the JPS team to arrive was not a surprise.

"Their response was quite quick based on some other calls that we have been to and the location," he said.

Taylor explained that "the lines were energised, meaning they had power, and water is a conductor of current, so we couldn't use the water. So, we had to wait until JPS men came here, turn the power off, and then we could go ahead and extinguish the flames."

Winsome Callum, the director, corporate communications at JPS, said her company's team responded as soon as the report was received, although she could not immediately give the precise time.

"A fire is treated as priority. We did have a team in the vicinity of Cross Roads, and once we got the report, the team was immediately dispatched. There might have been a delay caused by traffic. I think the fire station is kind of almost next door, and they have sirens, so they might have had an advantage.

Tashana Sewell Alcock, the public relations officer to the Houses of Parliament, said she was thankful that no one was hurt.

Meanwhile, Callum said the recurring problems with the transformer were not expected to continue.

"It is something that is being actively addressed, and I'm not expecting that it will be an ongoing issue."

Last week, low voltage linked to the transformer forced the suspension of parliamentary rules, allowing for members to remove jackets to do the nation's business.