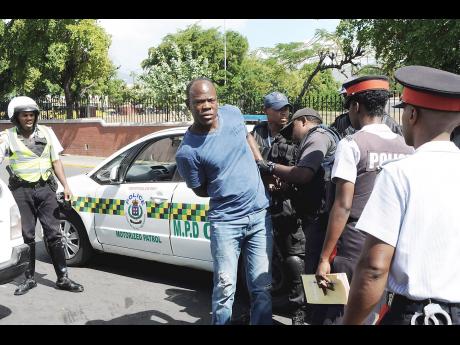 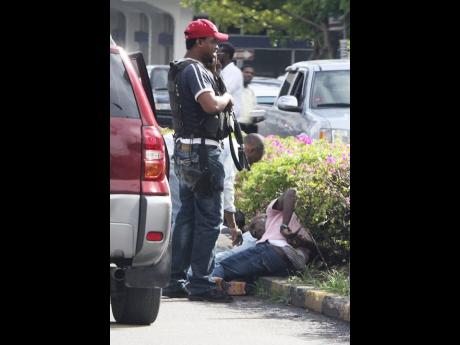 Peter Jordan/The Sun
Armed police officers arrest several males, including this man on the ground, on a busy Kingston street.
1
2

Assistant Commissioner of Police Norman Heywood is of the view that the manner in which Jamaicans are socialised is what usually causes them to resist arrest by the police.

He has joined the many persons commenting on the incident during which police personnel arrested a woman, cell-phone footage of which vent viral on social media. Some viewers accused the police of being brutal in their treatment of the woman. Others, including Hamish Campbell, deputy commissioner of the Independent Commission of Investigations, felt the police were only trying to restrain her.

Heywood told The Gleaner yesterday that if citizens had an appreciation for law and order, they would not be quick to videotape the police's attempts to arrest persons, but would instead encourage these people to comply with the officers.

"What we need is more citizens coming out and standing up for law and order instead of videotaping an incident between a police and a civilian. Normally, some people come on and see a situation building up between the police and a citizen. Instead of saying, 'stop resisting the police' [they start videotaping]," he said.

"I think it's how the society is being socialised. There is a general lack of order in society, and it's in every walk of life. People feel that there is no responsibility on their part. If you want to live in an orderly society, citizens must realise that they have responsibility. They have a duty to cooperate with law and order. If you feel that you were wrongly arrested then you will have your day in court. If you do not, you end up in a society of chaos and everybody will do what they want to do."

Heywood also highlighted that the force the police use at the point of effecting an arrest was heavily dependent on the existing threat level.

Heywood said that greater sensitisation efforts should take place among the youth to get them to understand what they should do upon being arrested.

The police have provided pointers on the responsibilities of citizens who are being arrested and the those of the arresting officers.

- Not run away when approached by a police officer.

- Show no hostility and comply with the instructions of the police.

- Listen carefully to all the instructions or requests made of you.

- Remain calm and remember that there is nothing to fear.

REMINDER TO THE POLICE

- Do not use force if questions, requests, demands or commands are disregarded; citizens have a right to remain silent.

- When questioning a citizen, it should not be done in an intimidating manner.

- An officer should present his/her identification card when asked by a citizen.

- The police have a responsibility to inform the citizen what he/she is being searched or arrested for.

- Reasonable and proportionate force may be used by the police to make a lawful arrest, in self-defence, to other members of the Jamaica Constabulary Force or other citizens who are facing an immediate threat to their safety.