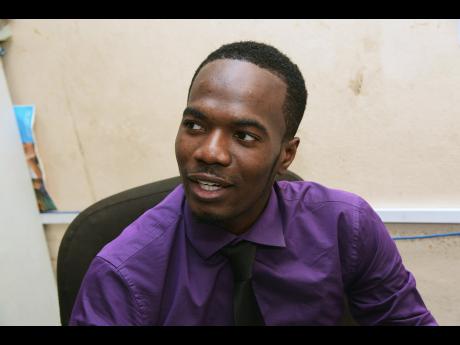 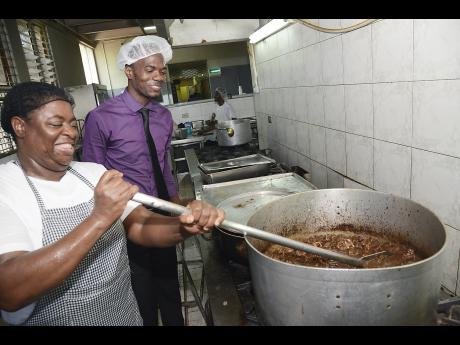 Rudolph Brown
Brown seems ready to partake of what Citricia Smith-Pennant is cooking. 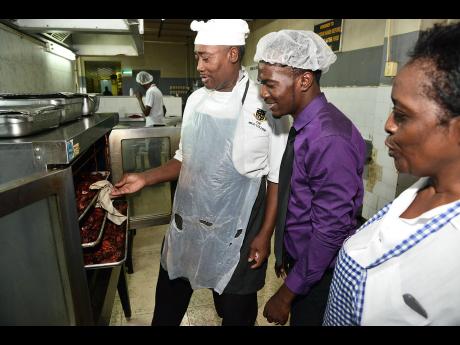 The horror of his close relative and guardian leaving him in a water tank to drown as a child, to this day, has not left the mind of Hopeton Brown. However, this, in addition to other torturous experiences during his early years, has propelled Brown to excel, having graduated from the Mico University College two years ago with a degree in food and nutrition.

The young educator, who hails from Craig Head in Manchester, has been emotionally scarred. When he was just three weeks old, he said his mother left him with his grandmother and has not returned since.

"My close relative came by my grandmother's house one day. In my mind, I thought we were going for a walk, only to find out that I was going to live with him. One evening, he took me out of the house, and I remember while walking, I saw this abandoned house where there were wells and tanks," said Brown, who indicated that he was about six years old at the time. "He threw me in the first tank and he took me out. Thinking about it, I figure it was because enough water was not in it. He threw me in another tank, and by this time I was confused, not knowing that he wanted to get rid of me. I remember the water was up to my chest, and he left me in there for a long time," he continued.

Only recently, he said, he met the woman who rescued him that day. "She told me that she heard me crying and she quickly went for a rope and pulled me out. It was an emotional time for her, too, because she lost a cousin in the same tank as well," he told The Gleaner.

What was most troubling for Brown, however, was the fact that he had to continue living with his close relative and guardian for a long time and the abuse continued.

Brown then told our news team about the unstable academic journey he had to endure, having little or no opportunity to excel. "I went to several primary schools. I started out at Alligator Pond Primary and Junior High School (St Elizabeth). I went to Wesley Memorial Primary in Manchester and from there to Bethabara Primary and Junior High School (Kingston); Low River Primary in Trelawny; went back to Bethabara; and my last stop was Pike All-Age (Manchester). I was all over the place," he told The Gleaner.

His breakthrough came, however, in 2002 when he ran away and went to his grandmother's house and had the opportunity to sit the Grade Nine Achievement Test (GNAT) in 2003.

"I returned to my grandmother in 2002, but I had to sit out till January 2003 before I could go back to school again. I went to Pike All-Age, where I did GNAT, and to my surprise, I got through for Holmwood (Technical High School). It was like my biggest achievement back then because when I was living with my relative, I was going to school seven or eight days for the month. So I grew up with this yearning to experience school life," he said.

"I always had to be doing extra work because I was struggling with the reading, even up to the grade nine level. During that time, I had to start working as well, so when other students could spend time with family and friends in the summer and at Christmas time, I was at Super Plus (supermarket at the time) packing bags."

The 28-year-old was not daunted and managed to gain five Caribbean Secondary Examination Certificate (CSEC) subjects. He was also successful in achieving a scholarship to move on to sixth form. After completing his secondary education, a friend encouraged him to move to Kingston. That he did, but the challenges continued. Brown 'cotched' in several homes in the inner city - from Rockfort to Tivoli Gardens, Rema, among other communities - in a bid to seek a better life for himself.

"I was going to Maths Unlimited and working at the same time, but I got laid off, so I couldn't afford the class again. I eventually had to practise on my own, so I would do five problems a day until it became almost a hobby. I fell in love with maths," he said.

"In 2010, during the incursion (Tivoli), I had the maths exam (CSEC). I remember the morning of the exam, I walked past everything (policemen, protests, etc) with $200 in my pocket. I decided that nothing was stopping me from doing my exam. I did my exam and passed maths," he declared.

Soon after, his journey began at the Mico University College. "I was selling in Coronation Market (Kingston). One Friday evening, I remember it was raining. I was wearing my short pants and slippers. I got a call saying, 'You are accepted to come to the Mico'. I was very happy, but I was wondering where I was going to get the money. I managed to come up with $50,000. Soon after, I started classes, being the only male in my group," he recalled.

Brown's worries were to continue, for very soon into the start of the school year, the persons he was staying with told him he had to move out. "I was very worried because I could not afford to pay rent. Thankfully, I spoke with a hall manager and they worked out something for me. It wasn't the best mattress as by that time other students would have taken the better beds, but I managed for the four years," he said. "If the mango trees could talk, they would tell you the many nights I searched for mangoes just to survive because I had many days when there was nothing to eat," Brown told The Gleaner.

All the many sacrifices paid off as in 2014, he graduated with his degree in food and nutrition and is now a trained teacher. He is currently the supervisor for the food storeroom at the college. He was also eager to inform the news team that he met his wife during his third year at the university.

He used the platform to encourage youth to be focused. "As an educator, I have learnt that it is important that young people have someone to talk to. I am no better than the young boys at the stop light because I had to endure severe challenges just the same, but I was determined to excel. I am going for my master's and doctorate," he promised.