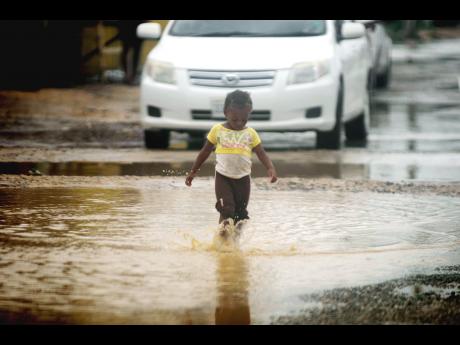 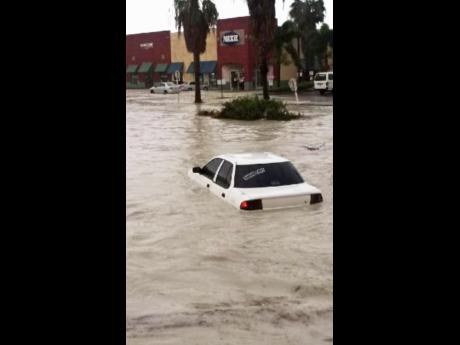 Contributed
A submerged vehicle on a roadway in Montego Bay, St James, yesterday.
1
2

JAMAICANS, SURPRISED by the suddenness of warnings to prepare for a major weather system, are breathing a sigh of relief after the country escaped the worst of an “unusually” fast-moving tropical wave which developed into a storm after passing south of Jamaica yesterday.

Up to press time last night, the Meteorological Service maintained the tropical storm warning for Jamaica although Earl, packing winds of nearly 50 miles per hour, is moving over the western Caribbean and is expected to pass just north of the Honduras Bay Islands this afternoon and then “very near to the Belize coast early tomorrow”.

The Met Service added that showers and thunderstorms across Jamaica are expected to decrease today as Earl and its associated weather move farther away from the island.

Even as some citizens rejoiced that Jamaica was spared the brunt of storm-like conditions that meteorological officials projected,several parishes, including Portland, St James, Manchester and St Thomas, experienced heavy rains, gusty winds and even flooding.

Fairview and Albion in Montego Bay, St James, were two of the most affected areas, with even cars being submerged in the water that concentrated in the townships.

Bull Bay, on the border of St Andrew and St Thomas, was lashed with heavy rains and so, too, sections of southern Manchester and Clarendon.

Glendon Harris, mayor of the Second City and chairman of the St James Parish Council, said he did not expect damage to cost near the $20 million incurred for similar floods in February.

“There’s not much damage to roadways or anything like that. The rain just fell heavy for half an hour and everywhere was cleared within 15 minutes after the rains,” he told The Gleaner.

However, according to the mayor, users of the city are to blame for the flooding because of improper disposal of garbage which he suggested blocked the drains.

“Garbage causing the problem. We need to start to lock up some people for improper disposal of their garbage. Public education hasn’t been working and they (city users) not accepting and figure that a garbage collector should be behind them. They are the same ones complaining that rain failing and the place flooded out,” he said.

Jamaicans on social media and in the streets expressed relief that the island was not more severely impacted, with some questioning whether the authorities overreacted.

Meanwhile, the Office of Disaster Preparedness and Emergency Management said despite the winds and heavy rains, it received no report of persons needing to evacuate their homes and use shelters.

The agency’s director general, Major Clive Davis, told The Gleaner that the office, however, remains on standby to provide services “if necessary”.

Stephen Shaw, communications manager at the National Works Agency, said an assessment of roadways will be done after the rains stopped.

“It’s still raining in some sections of the island. There are areas that are susceptible to land slippage and fallen trees. With the rain falling and embankments becoming wet, there is always the possibility of landslides and boulders rolling off hillsides on to our roads,” Shaw told The Gleaner.

During a press conference on Monday, when the tropical storm warning was issued, Local Government Minister Desmond McKenzie reported that the National Emergency Control Centre was activated and urged Jamaicans to stock up on emergency supplies and make use of shelters if required.

Many of the Emancipation and Independence celebration events that started on the weekend had to be curtailed and others scheduled for this week postponed, as the authorities sounded the alarm about a threatening weather system.