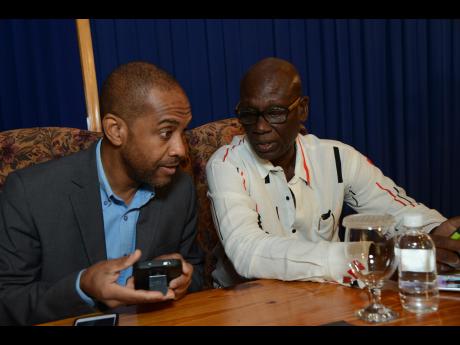 Ian Allen
Desmond McKenzie (right), minister of local government, speaks with Evan Thompson (left), deputy director general of the Meteorological Services, during a press conference at the Office of the Prime Minister.

The Jamaican Government is defending its response to this week's threat of a tropical storm, which critics have argued was an overreaction and in possible violation of forecasting norms.

"[I]n my 32 years of Caribbean forecasting, I've never seen it before," the US newspaper Washington Post reported John Morales, chief meteorologist for an NBC affiliate in Miami, Florida, as saying of Jamaica's decision to issue tropical storm warnings for a system that had not yet been formally upgraded.

Some members of the public have also questioned whether the Government was too hasty in activating the national emergency operating centre.

But yesterday, Local Government Minister Desmond McKenzie said the Andrew Holness-led Government was not "going to take any chances" with a threatening weather system.

"We have a responsibility to ensure that whenever the experts provide us with the information, that we take the necessary steps to ensure that we protect lives and property, and that is what we did by activating the national system," he said during a press briefing at the Office of the Prime Minister yesterday.

He continued: "The country was placed on alert because it is the opinion of this administration that we are not going to take chances when it comes on to any system. We'd rather do all the things that are necessary instead of trying to play catch-up."

Meanwhile, Evan Thompson, head of the Meteorological Service, Jamaica, said he hoped that the US forecaster was not suggesting that Jamaica not take steps it believed necessary to protect its citizens.

"We cannot sit waiting. That's what some persons in the Eastern Caribbean have done in the past. They sit there waiting for a bulletin from the National Hurricane Center that is not coming," Thompson told The Gleaner.

"We sit waiting on these products and lives are going to be lost, which has happened in the Eastern Caribbean. I don't intend for that to happen in Jamaica. We are a sovereign nation. We need to take the responsibility into our own hands," the Met Service head added.

On RJR's Beyond the Headlines yesterday afternoon, Morales, after hearing Thompson's explanation, described the Met Office decision as "excellent".

On Monday, Thompson said while the then tropical wave had yet to be upgraded to a storm, it was exhibiting features befitting the classification.

Jamaica issued a topical storm watch and, later, a warning before the wave was formally upgraded to Tropical Storm Earl on Tuesday.

Noting that Jamaica's Met Service issues its own warnings, Thompson said yesterday that international discussions were under way to address issues similar to those that occurred with Earl.

The Opposition People's National Party Spokesman on Local Government, Noel Arscott, said he was "generally" satisfied with the Government's response although he questioned whether all parish councils had carried out drain cleaning with the $250 million that had been allocated and made available for that purpose at the start of the hurricane season.

"I listened carefully to the views of the experts who were trying to be overcautious. It's better to be safe than sorry," Arscott told The Gleaner.

St Mary - were listed by McKenzie as parishes affected by the passage of Earl along the south coast.