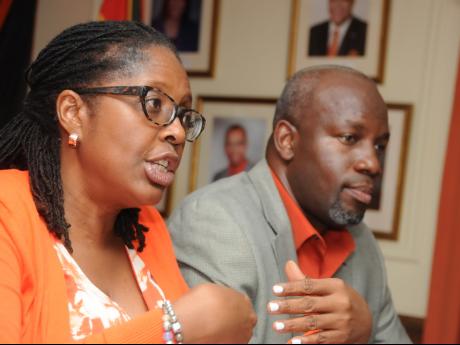 Jermaine Barnaby
Mayor of Kingston Dr Angela Brown Burke, president of the caucus of People’s National Party (PNP) councillors, addresses journalists while Scean Barnswell, mayor of May Pen and vice-president of the caucus, looks on during a press conference at PNP headquarters in St Andrew yesterday.

With local government elections in the air, the People's National Party (PNP) is intensifying its preparation with the announcement of a "dialogue on core values" involving the local authorities reeling from an anti-corruption movement spreading across the councils.

The PNP controls all 13 parish councils and the Portmore Municipal Council. Three of the parish councils, in the last three months, have been the sites of police raids that have ended with the arrests of employees and a growing bill of millions in alleged misuse of public funds.

"The core values that we're talking about [include] openness and honesty. All leaders, whether they are elected or community leaders, people place some confidence and trust in you, and one of the things we need to do in return is to honour that confidence and trust," she told journalists during a press briefing at the party's Old Hope Road, St Andrew, headquarters.

"When leaders are open and honest, there is less suspicion, and individuals do not have to make up their stories because they have access to the truth."

Brown Burke said the PNP's push for dialogue was linked to the recent gazetting of laws aimed at strengthening the powers of parish councils.

But pressed by The Gleaner, Brown Burke, who heads the national caucus of PNP supporters, and May Pen Mayor Scean Barnswell admitted that the imminent local government elections make the dialogue timely.

The last local government elections were in March 2012.

Over the four-year period, several investigations involving allegations of corruption have been done, with some leading to the arrest of high-ranking officials, including Barnswell and former mayor of Lucea in Hanover, Shernet Haughton.

Barnswell was found not guilty of corruption charges, while the case involving Haughton is still before the courts.

More recently, the Clarendon, Manchester and St Catherine parish councils were probed by the elite police unit, the Major Organised and Anti-Corruption Agency of the Jamaica Constabulary Force.

Brown Burke insisted yesterday "there was no breakdown at all" of oversight of the parish councils over the last four years.

Noting that councils are subjected to internal and external audits, she said, "Where there might be issues of practices that need to be dealt with, we have routinely dealt with them."

The PNP lost the February general election and the upcoming local polls are seen as a test of the PNP's machinery and its unity afflicted by internal fights that have been playing out publicly.

Prime Minister Andrew Holness has not indicated when the polls, which were due from last year, will be held.