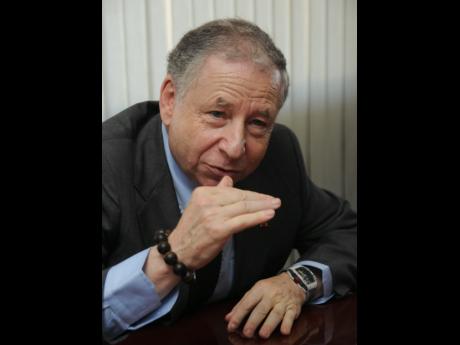 IN THREE years, Jamaica can become the model for road safety in the region if work continues on five critical areas, according to Jean Todt, special envoy for road safety to United Nations Secretary General Ban Ki-moon.

"Jamaica has all the ingredients of the puzzle to be the kind of example (for road safety)," Todt told The Gleaner yesterday in an interview at the company's Kingston offices.

Over the period January 1 to August 9, Jamaica has recorded 240 road-related deaths. That is a four per cent increase in road fatalities so far this year when compared with the similar period in 2015, data from the Road Safety Unit in the transport ministry show.

Agencies such as the National Road Safety Council have expressed alarm at the increase and the nature of the crashes - 10 of which have claimed 38 lives.

He said those issues could

get attention through support from the Inter-American Development Bank.

On post-crash care, the UN envoy said Jamaica "has everything available to make sure that between the moment of the crash and until the moment the injured person arrives at the hospital is less than one hour".

"If you put all the puzzle together, you will be able to make a fantastic result," he said.

Meanwhile, Todt, who heads the International Automobile Federation, has acknowledged that responses to road-safety issues are influenced by economic considerations which create a wide gap between so-called developing and developed countries.

According to the World Health Organization's 2015 global status report on road safety, low-income countries have fatality rates that more than double those in high-income countries.

Ninety per cent of road traffic deaths occur in low- and middle-income countries, yet these countries have just 54 per cent of the world's vehicles, it added.

Arguing that Jamaica, an upper-middle-income, indebted nation, is facing what France and other Western European nations tackled 30 years ago, the motorsport executive said governments simply have to make the issue a priority given the implications for their development.

His call for the issue to be a priority came hours after a luncheon he attended in which Paula Fletcher, executive director of the Road Safety Council, issued an appeal for the Government to demonstrate its care by moving swiftly to have Parliament approve the revised road traffic law.

Just over 12 per 100,000 of Jamaica's 2.7-million population die each year in road crashes, which, globally, claim about 1.3 million lives per year.