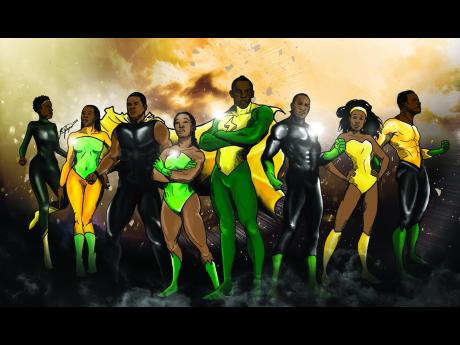 The first pages of the newest chapter of Jamaica's Olympic track-and-field history will be turned inside the Olympic Stadium in Rio de Janeiro today.

Daina Levy will become the first Jamaican to compete in the hammer throw event; Fedrick Dacres has a good shot at getting a medal but must first navigate his way to the men's discus final; oh, and there's the matter of the women's 100m, where history-chasing Shelly-Ann Fraser-Pryce and perhaps

her biggest threat - training partner Elaine Thompson, will stretch their legs and lay down the first markers in the women's 100m heats.

Throw in the giant Dutch star, Dafne Schippers, and that one promises to become rather feisty by the time we get to tomorrow's final.

Jamaica's presence at the Rio 2016 Olympic Games has delivered some early notable moments. Toni-Ann Williams' historic competition in gymnastics and two swimmers competing at the Games coming to mind.

However, things will kick up a gear or two on the opening day of competition, with 11 Jamaicans scheduled to feature.

The greatest attention will, no doubt, be focused on the Fraser-Pryce-Thompson-Schippers showdown, with all three expected to make light work of tonight's first-round requirement.

Fraser-Pryce is looking to become the first woman to win three individual Olympic gold medals in track and field but will be hard-pressed by Thompson, who, earlier this year, matched her 10.70 national record, with the late-charging locomotive Schippers also certain to push for the major medal.

The other Jamaican in this event, Christania Williams, was expected to have a breakout year with Thompson last season but was held back by injuries. She will definitely be relishing this opportunity.

Jamaicans have been making all sorts of noise in the throwing events, and Dacres, whose gold-medal wins at the youth and junior levels were ground-breaking themselves, will take a swing at a Jamaican Olympic first when he takes his 68.02m (the sixth best throw this year) into men's discus qualifying.

Only three men have thrown farther than Dacres this year, and the 2015 World Championships finalist certainly didn't sound like he was lacking confidence when The Gleaner caught up with him earlier this week.

"I'm ready. I feel very good. I'm happy with my season, and I am looking forward to compete," Dacres told The Gleaner.

Levy, who qualified for the Games with the last throw of what was her last meet before the qualification deadline for the Olympics, is the first Jamaican in action in the evening session and will get her chance to make it count in hammer throw qualifying, which gets under way at 8:40 p.m. (6:40 p.m.).

Aubrey Smith is listed in qualification Group 'A' in the men's long jump, with the in-form Damar Forbes lining up in the next group.

Forbes finished second at his last jump at the London Anniversary Games and also won his previous two competitions - at the National Championships and the Monaco Diamond League.