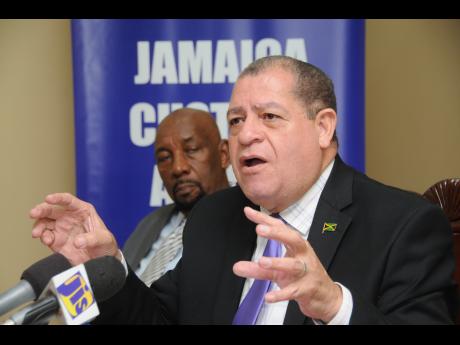 Minister of Finance and the Public Service Audley Shaw is urging commercial banks to make more low-interest loans available to micro, small and medium enterprises (MSMEs) which are involved in the productive sector.

According to Shaw, banks have made it easier for persons to obtain money for consumer items, while MSMEs are being left to struggle, due to prohibitive interest rates and hefty collateral requirements.

"If our MSMEs don't have access to formal credit, it is part of the problem, because you can't build a productive enterprise by going to one of our recent hybrids - of near-banking - and borrowing money at one per cent and two per cent per week.

"What kind of productive activity can you do by borrowing money at those unbelievable rates, or 50 per cent a year or 100 per cent a year? It can't work," declared Shaw during the groundbreaking ceremony for the National Commercial Bank's new banking and financial centre at Fairview in Montego Bay last Friday.

"So what I am saying, Patrick (Hylton), is that even as we put up a new edifice here, we also need new thinking. It cannot be that the easiest man to get a loan is the one that is borrowing some money to buy a car, but the person who wants some money to do something productive, to earn for his family and to earn foreign exchange, that becomes the hardest possible task to raise some money.

"It requires a cultural point of departure in our approach. Time is not on our side," said Shaw.

The finance minister said he has directed the Bank of Jamaica to be the lead agency in the creation of a 'formal, structured and research-oriented' financial inclusion strategy, aimed at getting MSMEs greater access to credit.

"We have to find a way to get real access to low-cost money for good businesses - good ideas. That is a challenge there not just for the Government, but for the financial sector. It's a challenge for the commercial banking sector.

"Because, let's look at it, you know, of our total depositors in the banking system, less than 20 per cent of them are borrowing from you. They are depositing but they are not borrowing, and we need to increase the rates of those who deposit, for them to borrow as well," Shaw said.

"So part of the strategy in moving towards growth is that we have to have more access to credit to more people who are prepared to be risk-taking, innovative, risk-taking; come up with good ideas, produce for import substitution as well as for export," said Shaw.

According to the finance minister: "In this city it is not only symbolic that we are setting up this centre, but we have to use this moment as a point of departure to say to people there can be a legitimate path to wealth creation; it doesn't have to be lotto scamming. That has to go! And it has to be replaced by businesses, and it can only be replaced by legitimate businesses if we have legitimate access to credit on a sustainable basis where good plans come to us. We need to encourage that."