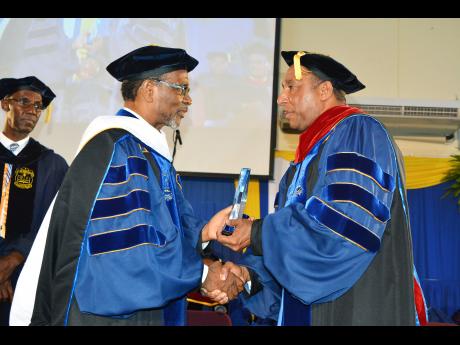 Contributed
Dr Trevor Gardner, president of Northern Caribbean University (NCU), presents the university's Product Sample Award to Dr Mansfield Edwards during the second commencement ceremony. At left is Pastor Everett Brown, president of the Seventh-day Adventist Church in Jamaica and chairman of the NCU board of governors.

Dr Mansfield Edwards, president of the Ontario Conference of Seventh-Day Adventists in Canada was yesterday recognised as the Northern Caribbean University (NCU) 2016 Product Sample during the second commencement ceremony held at the university's main campus in Mandeville, Manchester.

Born and raised in St Andrew, Edwards is the recipient of the 2010 African Canadian Achievement Award of Excellence (ACAA) in the category of religion for his significant contribution to the country and the community.

He is the current chaplain for the York Regional Police and the Association of Black Law Enforcers (ABLE) and a member of the executive committee of the Canadian Federation of Inter-Cultural Friendship.

"We are very happy for the achievements and significant contribution that Dr Edwards has made and continues to make to the people of Ontario, Canada," said Pastor Everett Brown, chairman of the board of governors at NCU.

"His work has made our Church and all Jamaicans, locally and in the diaspora, proud. We wish him God's continued blessings as he continues his service to God and humanity."

Each year, during commencement, NCU selects a product sample, who is an alumnus who exemplifies in life and work the ethos and values of the university, has eminent achievement in a particular field, and has made outstanding contributions to the development of society.

According to the university, the selected individual also represents hard work and dedication to duty.

Edwards graduated in 1981 from West Indies College (now Northern Caribbean University) with the Bachelor of Theology degree and entered denominational service in the Church's eastern region in Jamaica and served as district pastor and departmental director before migrating to Canada in 1999. He served as church pastor in Montreal and Quebec before being elected in 2009 to serve as president of the Ontario Conference of Seventh-Day Adventists, a position to which he was re-elected in 2013.