Large Abroad | From the land of wood and water to the land of the rising sun - Jamaican couple relocates, starts family in Japan 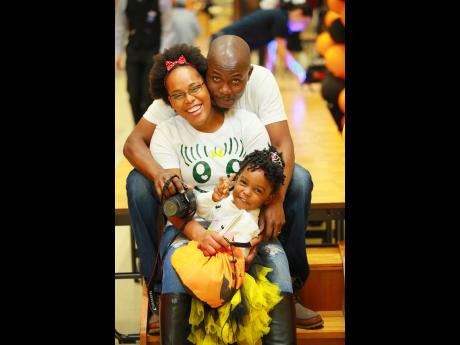 Contributed
The Rowes with their daughter, Asia-Nara Sakura.

In the land where the mountains kiss the sky and roll smoothly down to touch the earth, Candice Johnson-Rowe and Marvin Rowe have dared to make a new life.

This is the land of high-rise cities, imperial palaces, mountainous national parks, and shrines and temples as numerous as the people. This is Japan, where the Jamaican couple has decided to live, work, and raise a family.

The desire to move to Japan was first sparked by the prodding of Johnson-Rowe's Japanese instructor while a student at the University of Technology (UTech) and was further intensified by the difficulties she faced in trying to establish herself professionally.

"I wish I could say my desire to journey overseas was shaped by some story book I read, but no. I needed to become independent and stop asking [family] to help with the bills. I had a job but still needed help every month. I needed to change that. I tried many ways of getting here, including the SDA (Seventh-Day Adventist) church as a missionary. I finally got a job through a recruitment agency. It was not great, but all I needed was a foot in the door," she said in an emailed response to The Gleaner.

Her husband was soon to join her in Japan.

"I'd decided to visit her with the intention of returning to Jamaica. However, she decided I should not return as it would not be good for our marriage. After some reflection, I realised they were words of wisdom because Jamaica and other countries worldwide were experiencing a recession. After a few months, I got my first English teaching job," he told The Gleaner.

For the couple, who celebrate their eight wedding anniversary today, adjusting to life in the Asian country proved difficult because of the language barrier and the colour of their skin. The break for them came, however, when they were accepted to teach English at a private Christian school in the rural provinces of Japan. While teaching is a far cry from the insurance sales and welding maintenance work that Candice and Marvin did, respectively, while they were in Jamaica, the couple says they have found new purpose in teaching English as a second language to Japanese children.

"I genuinely love it. I have never really taught before, so all this was new to me. I was thinking, I speak English so, of course, I can teach it easily. I was so wrong. Teaching English as a second language involves a lot of repeating and memorising. There are also many rules and exceptions to those rules. These are things native speakers don't think about, so that makes it way more difficult," Johnson-Rowe explained.

According to her husband, the Japanese students are fascinated by the Jamaican culture and love both him and his wife as English teachers.

Now in the Pacific island for six years, the couple's daughter, Asia-Nara Sakura, was born in 2013, an experience Johnson-Rowe recalls with humour.

"During labour, I had to literally cuss out the team of doctors in my limited Japanese and English, but when the pain got intense, I went into full-blown Patois. I felt like they weren't doing enough to help with the pain but telling me 'ganbatte' (do your best). The head doctor later told me this was their first time experiencing this kind of labour because Japanese mothers are usually silent," she shared with The Gleaner.

The couple has urged Jamaicans to seek out opportunities in Asia rather than in the traditional diaspora markets of the United States, England, and Canada. Rowe pointed out that there is a great demand for English teachers in Japan that Jamaicans could fill.

"There are now many recruiters providing opportunities to live and work here. I am happy I made the move. It has been great for my marriage and young family, too. Living here has given me a new perspective on life," he said.