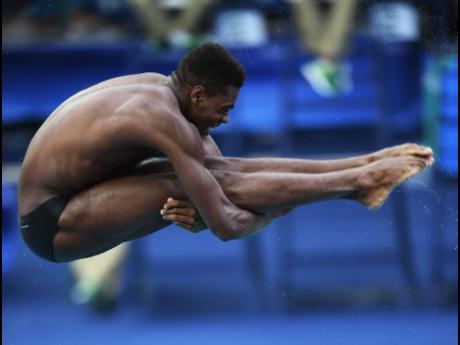 Knight-Wisdom qualified for the semis with an overall score of 416.55, which, according to the retired Olympian, was impressive.

She considers the British-based diver "the new poster boy of the sport" locally.

"He is doing fabulously well. It's a long competition, and basically he is diving consistently. That is what is making him climb up the way he is doing," Sullivan Sharp outlined.

She was speaking with The Gleaner in a telephone interview yesterday, and rated Knight-Wisdom's opening performance highly.

Sullivan Sharp, who first competed for Jamaica at the 1966 Commonwealth Games held in Kingston at age 10, and also at the 1972 Munich Olympics in Germany, says Knight-Wisdom dived "consistently well" in yesterday's preliminary round.

"Tomorrow (Tuesday) will be more of a mental test for him. [Yesterday] the pressure was lower, and today he needs to keep his nerve, keep relaxed and continue diving consistently," she explained.

She observed that the Jamaican diver's level of difficulty might have been less than his rivals, but he was consistently improving.

Meanwhile, Sullivan Sharp is encouraging the diver to "soak up the moment and enjoy the Olympics," while using the Games to grow into an "amazing ambassador" for the country.

According to the retired Olympian, who now resides in Florida, Knight-Wisdom "achieved a great feat in qualifying for the Games," and should be given time to develop. She feels no pressure should be on him, adding that the experience is a learning curve and that the sport should be given recognition.

"This is something that I have been pressing for. There is so much talent in Jamaica. Don't you see Jamaicans jumping off rocks and boats when you go out all over the country? That's natural talent, and when you look at it, you realise that with a little bit of coaching, they could become excellent. All it takes is for Jamaica to recognise that diving could be a sport, and I believe it could take off," she reasoned.

She said the sport has changed immensely by way of facilities, training technique and technical skills. She is also impressed with the use of video technology, which helps divers see immediately what they did wrong.