'This one's for Dad' 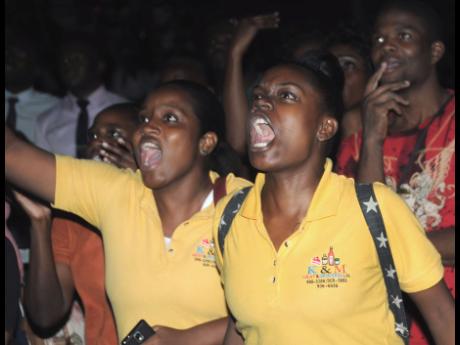 She did it again! Shericka Jackson produced a well-timed run to finish third in the women's 400m final inside the Olympic Stadium to lift Jamaica's Rio 2016 medal tally to four - two gold and two bronze.

Jackson came off the bend in fourth position, trailing gold medal winner Shaunae Miller (Bahamas), who clocked a personal best, 49.44, in a determined dive to the line, silver medallist Allyson Felix (USA), 49.51, and Natasha Hastings (USA), 50.34, who she outpowered to the end to win her second major medal, after securing one of similar colour at last year's World Championships.

"This is for my father (Desmond Jackson), who celebrates his birthday tomorrow (Tuesday). I am feeling good that at age 22 I am an Olympic medallist," said Jackson.

"Watching Shelly-Ann Fraser-Pryce run through so much pain and take bronze motivated me to go out there and perform," she added.

Jackson became only the third Jamaican to medal in the event at the Olympic Games after Shericka Williams (2008) and Lorraine Graham (2000).

It was the Jamaican highlight on a day when diver Yona Knight-Wisdom scored 416.55 points to finish 11th and book a place in today's men's 3m springboard semi-final at 10 a.m. (8 a.m. Jamaica time).

Usain Bolt will continue his quest for a third straight Olympic triple-triple when he lines up in the 200m heats.

"I'm always confident running the 200m. Everybody knows how much that event means to me and I am ready and looking forward to it," he said after his 100m gold medal run on Sunday.

Bolt will line up in Heat Nine and will run from Lane Five.

Yohan Blake, who finished fourth in the 100m final, has promised an improved performance here and will feature in second heat, where he will line up in Lane Six with Nickel Ashmeade (Lane Five) listed in the sixth heat.

While it was a gentle downpour in McLeod's heat, Deuce Carter and the others who followed in the next heat were drenched in much worse conditions.

Carter struggled, hitting the sixth and seventh hurdles before finishing at the back and was eventually disqualified for "deliberately knocking over a hurdle" - according to the quoted infringement - rule 168.7b.

Competition was delayed immediately afterwards due to the inclement weather.

However, the IAAF later announced a rerun of the first two heats involving athletes - including those who were disqualified who did not advance on placing.

Carter would later finish in front in the rerun in a time of 13.51 to secure his spot in the semis.

Commonwealth champion Andrew Riley finished third in his heat in a time of 13.52 and will join McLeod in the next round, an improvement from his first-round elimination at London 2012.

However, two-time Olympic champion Veronica Campbell-Brown, 22.97, was surprisingly eliminated after a third-place finish in her heat.

All three Jamaicans are safely through to today's semi-finals of the men's 400m hurdles, which starts at 9:35 p.m. (7:35 p.m. Jamaica time) after contrasting results in the heats yesterday.

Annsert Whyte lowered his personal best to 48.37 on his way to winning his heat, while World Junior champion Jaheel Hyde, 49.24, and Roxroy Cato, 48.56, qualified outside of the automatic spots after both finishing fourth.

Leah Nugent was also disqualified from her heat because her trail leg fell below the horizontal plane of the hurdle at the point of clearance.

However, after an appeal by the Jamaica team management, Nugent was reinstated and will run in today's semi-finals.

It's the end of the road for triple jumper Clive Pullen, who finished 17th in his flight with a best jump of 16.08m.

Shadae Lawrence failed to advance in the women's discus throw, with a best of 57.09m, which left her 12th in her group.

Kellion Knibb struggled throughout and failed to post a mark, while Tarasue Barnett managed a best of 58.09m for 16th place overall.