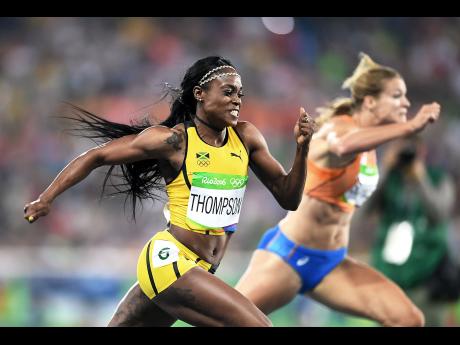 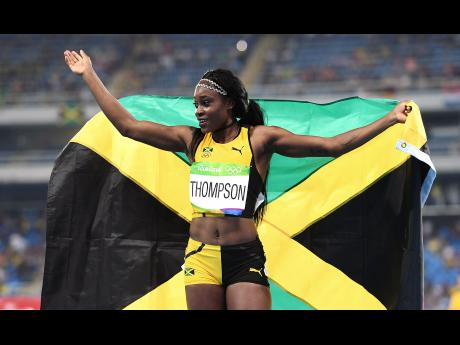 Elaine Thompson did it again!

The Olympic 100m champion returned to the scene of Saturday's triumph to become the seventh woman to win an Olympic sprint double with a determined and powerful run in the 200m final, clocking 21.78 - the third fastest winning time in an Olympic women's 200m final.

So much so that the world's fastest man himself, Usain Bolt, could hardly contain himself as he watched on a television set in the mixed zone after his 200m semi-final win a few minutes earlier.

"Hold it! Come on! Hold it!" Bolt shouted in excitement.

And hold it she did.

"Its amazing to come out and win another gold medal. I'm speechless right now," said Thompson.

Thompson left her blocks in a hurry and came off the curve with the advantage, but, as expected, she came under heavy assault from Dutch star Dafne Schippers, 21.88, as the pair, like they did at the World Championships last year, separated themselves from the chasing pack in a seat-edge dart to the finish line.

This time, it was the Jamaican who was celebrating loudest - albeit belatedly, after waiting nervously for confirmation of another glittering gold. American Torie Bowie was third in 22.15.

"My coach has always told me that I can do it. He told me to keep my knees up and push to the line, and I think I did that and that's why I came out with the win," Thompson added.

As she raised her arm and punched the air, so did, no doubt, the crowd that had gathered in her hometown of Banana Ground in Manchester, and so did Bolt, who looked way too easy for the 19.78 seconds that flashed on the clock after his win.

It's an ominous sign for those who will be looking to deny him a record third straight Olympic double sprint gold when he finally faces the starter's gun at 10:30 p.m. (8:30 p.m. Jamaica time).

Bolt has the fastest time going into the final, but he won't have any Jamaican as company since Yohan Blake, who was sixth in his semi in 20.37, and Nickel Ashmeade, who finished fourth in his race with a time of 20.31, looked like mere shadows of themselves in a couple of miserable runs on the night.

Also missing out was American Justin Gatlin, who was third in his semi-final in 20.13, with LaShawn Merritt, 19.94, expected to bring the biggest challenge to Bolt.

"I feel great. I am ready. I didn't want to run that fast, but he (Andre de Grasse) pushed towards the end," said Bolt. "I think I am in good shape to run really fast and I definitely think I can go for the record."

The world waits with bated breath.

Things were less positive for the Jamaican middle-distance athletes as none of the island's three women was able to advance to the next round of the 800m.

Kemoy Campbell was also unsuccessful in qualifying for the men's 5,000m-final after running 13:30.32 in his heat for a 10th place finish.

It was also a rough evening for the women in the 100m hurdles as Jamaica's dry spell in the event continued, with Megan Simmonds, Shermaine Williams and Nickiesha Wilson all failing to make the final.

Williams clocked a season-best 12.86, but finished fifth in her semi-final, with national champion Simmonds, 12.95, also finishing fifth in hers and Wilson running seventh in 13.14. No Jamaican woman has qualified for the Olympic 100m hurdles final since Delloreen Ennis and Brigitte Foster-Hylton did in 2008.

Today, World Championships bronze medal winner O'Dayne Richards will compete in the men's shot put event, with the qualification round and final both on the today's schedule.

The men's and women's 4x100m relay heats are also on the schedule today.

Simone Facey is expected to lead off the Jamaican women, with her cousin, Sashalee Forbes, running the second. She will hand to Veronica Campbell-Brown, with Shelly-Ann Fraser-Pryce, up to yesterday evening, expected to run anchor.

Jevaughn Minzie will get his chance and will start the men's 4x100m relay and hand to Asafa Powell, with Kemar Bailey-Cole on anchor. The third-leg runner was not confirmed up to yesterday evening with one of Nickel Ashmeade and Yohan Blake expected to run.