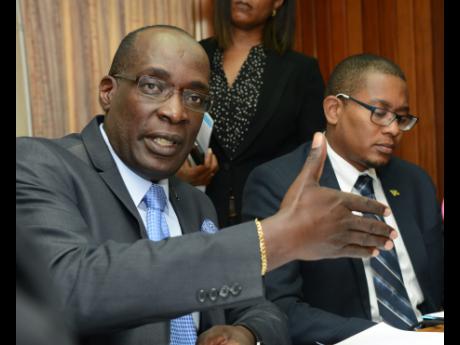 File
Ruel Reid (left), minister of education, addressing the media at a recent press conference. Looking on is Floyd Green, minister of state in the Ministry of Education.

Minister of Education Ruel Reid has expressed confidence in the improvements in schools being spearheaded by his ministry.

In an address to the nation, aired last night, Reid explained that the ministry was in the final stages of the Education System Transformation Programme (ESTP).

"Under the broad umbrella of Education System Transformation, we are in the final stages of re-engineering the Ministry of Education into a policy ministry with new operational arms. One ministry, with renewed purpose and focus," he said.

The ESTP was born out of the 2004 National Task Force Report on Education which called for fundamental changes to be made to the way the education system operates.

According to Reid, those changes have been achieved.

"We have devolved much of the ministry's main functions into new agencies, each focusing on specific areas of the education portfolio. We are creating a more effective, more efficient and a more accountable education system through this re-engineering."

The education minister said that the DSS has absorbed operational responsibilities for schools, while the central ministry will now focus on matters of policy and oversight.

Although it was extended for a year because of procurement delays, the ESTP has been hailed as a best practice for implementation of reform programmes.

International consultants MindBloom Consulting Limited, which conducted a summative evaluation of the World Bank-funded programme, concluded that the programme had, for the most part, met the objectives of transformation and modernisation as outlined in the 2004 Task Force Report and the National Education Strategic Plan (2011-2020).

"The ESTP has achieved significant results in a relatively short period of time. Achievement has been made on all project inputs," MindBloom said in its final report, which was compiled after extensive interviews and document reviews.

The consultants had high praise for ESTP Programme Director Jean Hastings, highlighting the fact that she has guided the project across successive political administrations during which time it has garnered international attention for its innovative programmes.

"The programme director worked within government to remove inter-unit and interdepartmental barriers. She also ensured that project funds were used to build capacity and ensure the smooth progression of the ESTP," the consultants said.