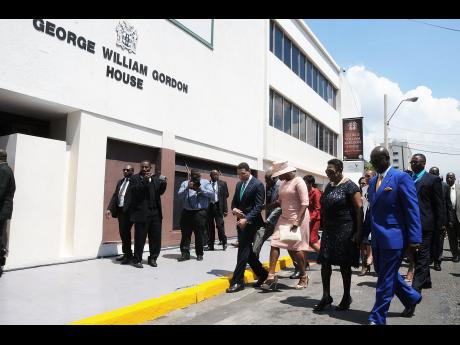 Jermaine Barnaby
Parliamentarians making their way into George William Gordon House, located 81 Duke Street, Kingston, built in 1960 and named in honour of one of the countrys national heroes. 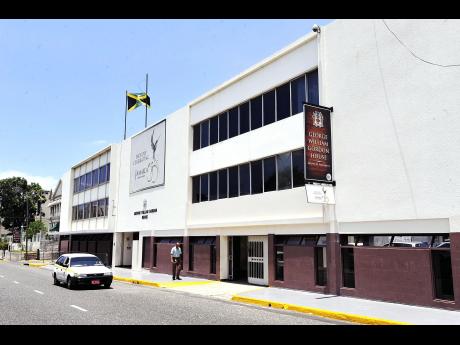 George William Gordon House, located 81 Duke Street, Kingston, built in 1960 and named in honour of one of the countrys national heroes.
1
2

More than a decade after the Oliver Clarke-chaired Parliamentary Salaries Committee presented its report recommending that "a new Parliament Building be constructed to allow for parliamentarians to perform their work efficiently", there is now a move afoot to retire the Duke Street-based building, which has served as the official meeting place of the Government since 1960.

The Gleaner understands that the Andrew Holness-led administration has found favour with the proposal to construct a new parliament building at the northern end of Heroes Circle in central Kingston.

Minister without portfolio in the Office of the Prime Minister Derrick Smith told The Gleaner that while the location had not been "firmly finalised", the sentiment within the administration is that an appropriate site for the construction of the building is in the vicinity of northern Heroes Circle.

Adamant that "we are going forward with it", Smith said the new Parliament "must happen" and the administration is fully behind its construction as the current building is in a bad state.

"What we have there is just not workable. What is happening is that it impacts on the performance of the Parliament and to some extent the behaviour of some members of the Parliament because the facilities are just not there, and that is frustrating," Smith lamented.

Over the years, several persons have lobbied successive administrations to build a new Parliament because of the inadequacies of the current one - officially named the George William Gordon House, located at 81 Duke Street, Kingston, which was built in 1960 and named in honour of one of the country's national heroes.

"The current one is very cramped. There are no real meeting rooms. We just have the chamber. Even committees of Parliament have to sit in the chamber. You cannot schedule many meetings because when the Senate or the House (of Representatives) is meeting, you cannot have any meetings. It is very inadequate and we need a modern Parliament," Golding argued.

Former President of the Senate Floyd Morris, who has been a leading voice in highlighting issues surrounding the poor infrastructure of the building, stated that "it is like a kitchen when compared to other parliament buildings that I have seen in the Commonwealth."

"It is antiquated and there is no comfort for parliamentarians to do the nation's business. One could suffocate with the smoke fumes coming from the canteen. It certainly does not make for good execution (of duties)," Morris said.

He pointed out that a major reason for the slow progress to construct a new building was that parliamentarians were fearful of the public backlash.

"The public already has a negative impression of politicians, so the construction will definitely be controversial. What is needed, though, is public sensitisation on the need for a new facility," Morris said.

To add to the controversy, Morris said the country's two major political parties - the Jamaica Labour Party and the People's National Party (PNP) - have been at odds as to where the new building should be erected.

In 2014, the Portia Simpson Miller-led Cabinet reversed the 2008 decision of the Bruce Golding administration to acquire lands surrounding Gordon House for the erection of the new building.

According to a ministry paper of 2014, favourable consideration was given to the establishment of a new parliament building at the northern end of the National Heroes Park, which is to be called Parliament Square.

"It is not because I support the PNP, but I believe that having the Parliament at Heroes Circle makes more sense because of space, among other things," Morris shared.

In the meantime, one of the country's leading architects is estimating that the construction of the building and landscaping of the grounds will cost some $2 billion (approximately US$16 million).

"Without a doubt, it would cost $2 billion or more. Of course, depending on the specifics, the intricacies of the design, and such, it could cost more, but there is no way it is going to cost less than that," said the architect with decades of experience, who declined to be named.

Only recently, the Grenadian government, with the assistance of several countries, began construction of a new parliament building, with a budget of some US$9 million tagged to it.

The Trinidad and Tobago government has also announced that as much as US$60 million could be spent on the construction of a parliamentary complex, which is expected to be completed in 2018.