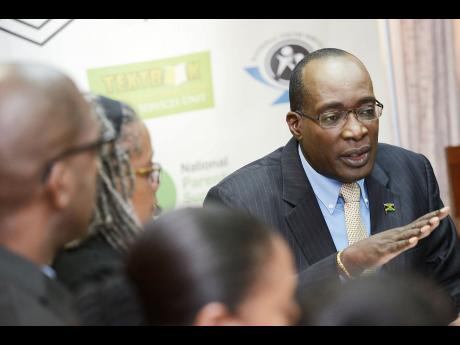 Rudolph Brown
Senator Ruel Reid, minister of education, youth and information, addresses a press conference to update the nation on back-to-school related issues at the Ministry of Education in Kingston yesterday.

As the back-to-school season gets into full swing, parents can expect to see increases of up to four per cent in the cost of textbooks.

The annual national survey of the textbook industry, conducted by the Consumer Affairs Commission (CAC) in partnership with the Ministry of Education, found that textbook prices have increased in keeping with exchange rate fluctuations.

The Jamaican dollar has continued to depreciate, resulting in several interventions by the Bank of Jamaica in foreign exchange markets.

According to the CAC survey, which was executed between July 25 and August 5, book stores have adjusted their prices to reflect the movements in the exchange rate.

"One hundred and thirty-three (133) of the most popular textbooks were selected for observation at major franchise book stores such as Sangster's Bookstore and Kingston Bookshop, as well as smaller/independent retailers," a joint release from the ministry and CAC said.

The survey results also seem to point to the possible shortage of high school textbooks. The survey found that the average percentage of stores with available stocks of grade seven-nine textbooks, literature texts, and CSEC and CAPE books was 30 per cent, 55 per cent, and 24 per cent, respectively.

Other data from the survey indicate that the average variation in the price of books among stores was nine and eight per cent, respectively, for basic school and primary school books.

At the secondary level, the variation recorded was 23 per cent, 12 per cent, and 14 per cent for grade seven-nine textbooks, literature texts, and CSEC-CAPE books, respectively.

Minister of Education Ruel Reid has urged parents to make use of the National Textbook Loan Scheme. He indicated that $800 million had been spent to procure new books, the delivery of which is currently ongoing. He also said that directives given to schools indicate that titles that do not appear on the approved textbook list must not be included in schools' booklists.

"The CAC and the ministry are encouraging parents to utilise the approved list endorsed by the Ministry of Education, and, where possible, utilise the National Textbook Rental Scheme or purchase pre-owned books," he said.