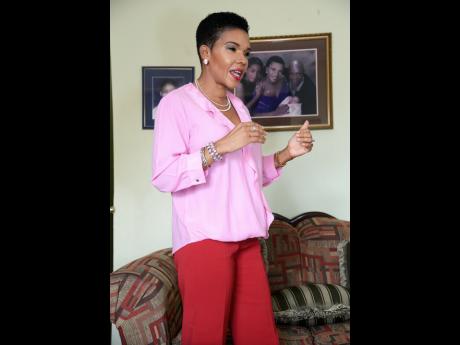 Ian Allen
Audrey Marks: Successive administrations have not put a focus on economic growth as a primary agenda, nor have we put in place an apparatus about making it such.

In the 54 years of Jamaica's Independence, Audrey Marks remains the only woman to hold the position of Jamaican ambassador to the United States.

Does she feel satisfied with the rate of advancement of women in roles such as this one?

"Absolutely not!" was her immediate response to that question, even while explaining that she did not support the notion of putting persons in posts based on gender.

However, Marks said she believes that women are still at a disadvantage for promotions and appointments based on meritocracy.

"Over the years, I have seen many women who could fill certain posts, but they suffer from three things when it comes to advancing professionally," she said.

1. Many are either reluctant to, or afraid of, being aggressive in making their capabilities known.

2. Many women between the ages of 35 and 55, and who have a family, prefer to sacrifice social and professional advancement to care for their children.

3. Institutionally, we are still struggling to see women as having equal abilities as men - not only as men to women, but, more so as women to women.

For decades, Jamaica has teetered on the brink of attaining economic success.

The Gleaner asked Marks to say what has prevented the country from achieving that reality.

"Successive administrations have not put a focus on economic growth as a primary agenda, nor have we put in place an apparatus about making it such. We need to do more than just verbalise it. Therefore, I am hopeful, because I see a plan in place to make economic growth, business facilitation, job creation and overall entrepreneurship, which are central to this idea, being put in place by this Government."

She said this was evident in the ministry dedicated to this objective, along with an Economic Growth Council and consistent updates by the prime minister regarding these objectives.

"It is not just stated, but it is a working objective," she stressed.

As a successful businesswoman, how does service to country affect the day-to-day running of her company during her prolonged absences and are there are more businesses in her future?

Marks said that, having in December sold majority shares in Paymaster and moving from the day-to-day operations to chairing the board, the transition solved some of the difficulties in the decision-making process regarding her new appointment.

She also revealed that, being the incurable entrepreneur: "Since January, I have started two new businesses and just concluded putting the structures in place to be able to recuse myself for an estimated three- to four-year period."

As she ventures forth on behalf of Jamaica, Marks reiterated that bringing foreign direct investments to the island will be her most urgent priority.

She stressed that Jamaica was in an enviable position as the nation is blessed with an abundance of natural resources, creative, hardworking people, an amazing location, and an English-speaking population in proximity to a very large market.