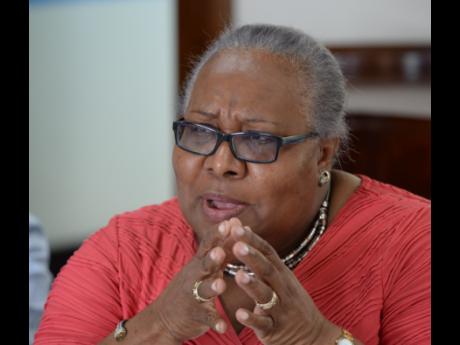 The growing consensus among Comrades appears to be that the People's National Party (PNP) is in need of renewal, with the latest to add a voice to the call being former general secretary, Maxine Henry-Wilson.

The party has been hit with one challenge after another since losing the February 25 general election, including imminent leadership and vice-presidency contests and accusations of misappropriation of funds donated for the election campaign.

"There are some people who think that the party can't go on without them. They would be surprised," Henry-Wilson told The Gleaner.

Borrowing a line from Shakespeare's Julius Caesar, Henry-Wilson said she believed "there is a tide in the affairs of men" and, therefore, everyone has to evaluate the current situation and determine if it presents an opportunity or is an indication they need to step aside.

"It (the party) doesn't belong to you, so are you serving the best where you are? That has to be constantly assessed and evaluated by every individual who is in public life so as to decide when it is time to go," she said.

Henry-Wilson, who served as general secretary from 1994 to 2003, also expressed dissatisfaction with how the party has gone about handling allegations that senior members who collected millions of dollars to finance the party's election campaign failed to turn over the money.

"I think that the party has been inflicted with deep reputational damage. In these situations, the quicker you act to, first, acknowledge that something has gone wrong and then put in place a credible process to find out and then recover reputations is very important," she said.

"So it can't be left to everybody just making statements. Everybody has a voice in this thing and it can't work like that in no organisation at all - whether a private, a public or political one."

The former minister of education and youth believes the political process in Jamaica has grown, and, therefore, more transparency and accountability is required.

"The parties have now matured and they have to be very careful about what used to be considered voluntary association and realise that it now has to be structured and it has to be functional, and that is the only permanent resolution to this current situation," Henry-Wilson said.

"Apart from the investigation and finding out what really happened, you can't go back to an ad hoc fundraising. It has to be structured, and based on clear accountable systems, because we are now open to very public scrutiny."

Henry-Wilson said her biggest disappointment was how the inner wranglings have distracted the party from the important issues of holding the ruling party accountable and fully evaluating the post-election appraisal report.

"As an alternate (SIC) government, the PNP has some responsibilities that it needs to carry out to the country in terms of scrutiny of what is happening, public policy, and so forth, and we are spending all of our time on internal disputes," she lamented.

"In terms of national development, we are at a critical point and we need all hands on deck in terms of views and paying attention to what is happening other than descending into chaos and anarchy."