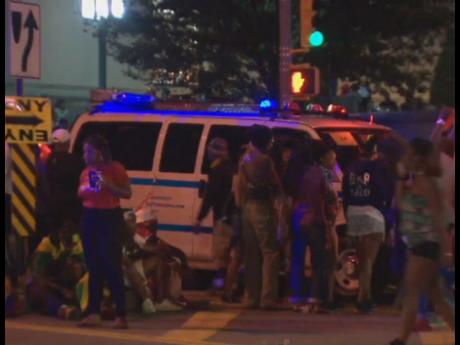 People gathered near an emergency vehicle after the shooting at the West Indian Day Parade in Brooklyn, New York - photo via Twitter

The annual West Indian Day Parade in Brooklyn, New York, has again been marred by violence.

The New York Police Department (NYPD) is reporting that two people were shot dead and at least two others injured as scores of revellers participated in a J'Ouvert parade in Crown Heights shortly before 4 o'clock  this morning.

The West Indian Day celebration is held on the first Monday in September each year to showcase the culture of Caribbean people.

Over the years the parade has attracted some of New York's most powerful political figures, but has faced mounting criticisms because of the violence associated with it.

Last year, Carey Gabay, who was then an aide to New York Governor Andrew Cuomo, was killed by a stray bullet during a J'Ouvert party.

This morning's shootings come amid reports by the New York Daily News that a group of cops was participating in an online pool inviting persons to predict how many people would be killed or injured during the celebrations.

The Daily News reports that initially cops outnumbered revellers this morning as the NYPD went all out to ensure the celebrations were peaceful.

However, its reported that revellers were sent scampering for cover when they got to a section of Crown Heights as gunfire erupted.

When it ended one man died of a gunshot wound to the chest while a woman was killed by a bullet to the head.