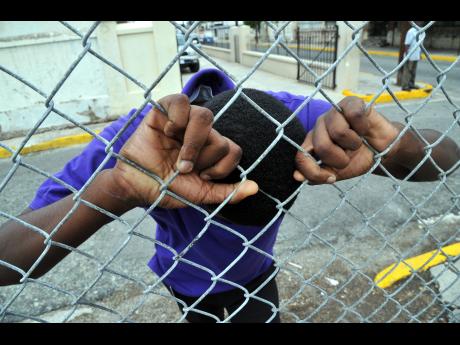 Norman Grindley
An estimated 40 per cent of Jamaican men are battered by their women and suffer in silence.

A local study has found that approximately 70 per cent of domestic disputes are centred around finances, and while men are more likely to physically abuse women, it is the women who are generally more likely to instigate the conflict.

The recently completed study looks at power and conflict in the home and represents a serial snapshot of society.

It was carried out between 2007 and 2014 by Dr Herbert Gayle who lectures in the Department of Sociology, Psychology and Social Work at the University of the West Indies (UWI), Mona.

"The problem we are finding, though, is that we make this assumption that once it's domestic violence, it's the woman who is the victim.

"What we are finding in Jamaica is that if you separate fight from batter - fights meaning sometimes I win, sometimes I lose, sometimes I get a chop with the Dutch pot cover, the next time, I probably get in a fist - when we speak about it mechanically and remove the emotions from it, that's fight, that's not one person battering the other," added Gayle.

UWI graduate Jason Ramsay has also conducted extensive research on the issue of men in domestic-violence situations and has found that apart from money, men are often abused by women when it is suspected that they are cheating.

"One lady said that she saw her boyfriend dancing at a party and she actually walked up to him and stabbed him because he was dancing with a young lady," said Ramsay.

"When a woman is in confrontation or argument with a man, where she can't get physical, she tend to get verbose or verbal, and then when I did my research, one of the persons told me that in his case, it was a situation where she would abuse him and he would abuse her, because then she would go out into the streets and actually hurl insults at him, especially sexual insults, and that is instigating the abuse itself," added Ramsay.

Ann-Marie Virgo, from the Institute of Gender and Development Studies, UWI, Mona, has also argued that men are abused physically, emotionally and verbally by women, based on a study she conducted last year which looked at male victims of domestic violence.

"I know that for one of the participants, his female partner burnt him with hot water, so that was like physical abuse. Another one had a machete attack, and then you had others who had physical fighting, and then you had verbal abuse where the words would hurt some of them and would eventually lead to the emotional abuse," she said.

UPDATED: 'Wo-manhandled' - Battered men make up 40 per cent of domestic violence victims .. Policeman sticks with abusive wife for 15 years
UPTOWN HELL! - The socialite, the abusive spouse and the deadly code of silence
Cruel cop! - Woman flees after 10 years of beating at the hands of her police boyfriend