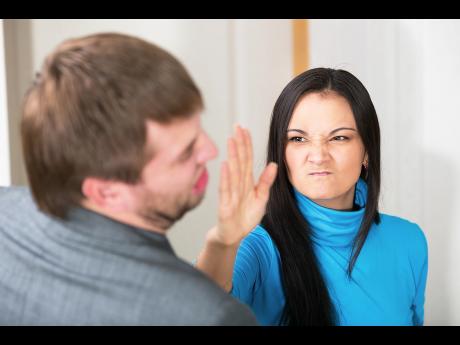 A roleplay of the sort of abuse suffered by Michael*: We would have an issue and then she would slap me and then walk away. 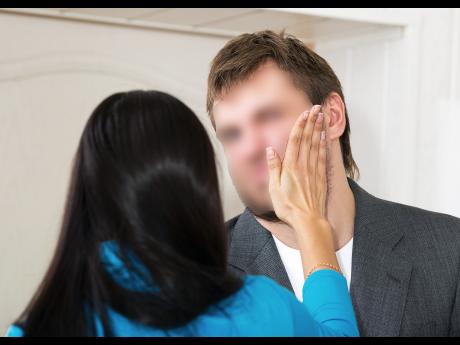 A roleplay of the sort of abuse suffered by Michael*: We would have an issue and then she would slap me and then walk away.
1
2

As a member of the police force he was feared on the streets, but Michael*, a recent divorcee, admits that he was often abused by his girlfriend and later his wife, but did not retaliate because of his childhood pledge to never hit a woman.

Michael, who is no longer in the force, said despite weighing more than 180 pounds and standing more than six feet tall, this was never a deterrent to his female abusers, who used their tongues to inflict pain when they weren't using their hands.

"Even at that time when I was a cop and I had a gun from the force and I was able to take it home, I remember we would get into an argument and my girlfriend would slap me," he told The Sunday Gleaner.

The former cop is peeved that men are generally perceived to be the instigators of domestic violence and women the victims. He has found that women can be just as abusive as men when they hold some position of authority and power.

That is in line with a study carried out by university lecturer Dr Herbert Gayle, who is also the chairman of the community-based parenting group, Father's Inc.

According to Gayle, battered Jamaican men represent 40 per cent of the victims of domestic violence. However, he found that there is usually very little support for these men, and national campaigns on domestic violence have for the most part focused on women.

"It's not like men are not being battered in Jamaica; we see them claiming that they fall off the stairs. We have them all the time. It is just that they don't have the space and the frame within the state (and) within the social setting to report," said Gayle.

"The problem we are finding, though, is that we make this assumption that once it's domestic violence, it's the woman who is the victim," added Gayle.

For Michael, that is a reality he lived with for years.

"Don't believe women are naturally less violent. It is just a matter of the position in which you are and what you can use and capitalise on. So I hate when people sell this notion that it is just because 'I am weak and I am a female.' Because when they (women) are put in a position of power ... they take advantage (of men)," argued Michael.

Did it for Canadian citizenship

He said his ex-wife was abusive but he stuck with her because this paved the way for him to become a Canadian citizen.

He was married for 15 years and said during that time his wife openly cheated on him, which was a further blow to his ego.

"She thinks she has some power over me because she would say, 'Is me give you the (immigration) papers'," said Michael.

"We would have an issue and then she would slap me and then walk away," he explained.

He said he had pledged to never hit a woman because he grew up in a household where his father at times physically abused his mother. However, he admitted that sometimes the situation became so unbearable that he broke his own vows.

According to Michael, he never shared his experience with anyone because he did not want to be ridiculed or looked down on.

"It wasn't even something that I would look to get sympathy for, or even express it to another guy, because when it comes to men I am a totally different person. So if the situation requires that I need to protect myself or get angry, then it would be different because I am not a soft person," he argued.

"I grew up in a household with all boys; my parents never had any girls. We all grew up very tough. We were always socialised just like the wider society to never hit a woman," he explained.

Michael argued that the wounds inflicted by women are not often as obvious to the eyes because most times the abuse is verbal.

"How guys are socialised is that we would say, you know what, 'man, just walk away, because you know that's women strength'. They would say 'you know what, leave, go out, do something, buy something and just come back'," said Michael.

"Most guys do walk away because they accept that it is a woman's strength and she will say whatever," he pointed out.

Michael feels that the society needs to be sensitised to the fact that men are just as vulnerable to domestic violence as women.

"From childhood, that is something we should look at, and I think that's where we can nip it in the bud," said Michael.

MEN: Silent sufferers - Male victims of domestic abuse less likely to cry out
UPTOWN HELL! - The socialite, the abusive spouse and the deadly code of silence
Cruel cop! - Woman flees after 10 years of beating at the hands of her police boyfriend