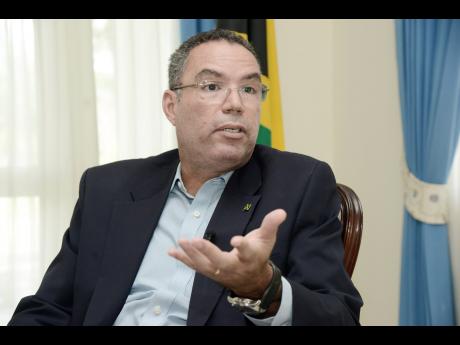 The Economic Growth Council (EGC) missed its August 31 deadline to submit its plans for growing the economy, but Daryl Vaz, the Government's point man on investments, says there should be no worries as the document could be submitted today.

"It's being finalised right now," Vaz, the minister without portfolio in the Economic Growth and Job Creation Ministry in the Office of the Prime Minister, told The Gleaner last Thursday.

"From August 31 to now, it's being put together. It has not been submitted (to the Cabinet) and I think it [has been set] for the 12th of this month (today)," added Vaz, who has responsibility for land, environment, climate change, and investment.

Vaz did not say what has caused the delay.

The EGC held its first press briefing on August 17, at which chairman, Michael Lee Chin, announced that a proposal containing the plans of the council would be submitted to Prime Minister Andrew Holness by August 31. Holness would then then take the document to Cabinet for approval.

Vaz declined then to state what areas for growth were being immediately recommended to the Government, saying he would not pre-empt the report being worked on.

Meanwhile, Vaz is pleading for patience from critics who have been claiming that the growth agenda being advanced so far only consists of investment projects.

"I'm not fully clear on what the growth agenda is. What appears to be bandied around as the growth agenda seems to be a list of investment projects," Densil Williams, professor and executive director of the Mona School of Business and Management, told The Gleaner last month.

"The establishment of the EGC is a positive step, but merely getting more projects into Jamaica will not deliver any sustainable levels of economic growth."

In response to Williams' view, Vaz said it was "a fair statement".

"[But] I am quick to remind Professor Williams, and all others, that we have been in office for a few months, and based on the challenges that we faced, coming into office and, of course, the restructuring of government, especially in relation to this particular ministry and the formation of the EGC, which will table their first report within this month, they would not have necessarily been seen because they were doing a lot of work to familiarise themselves with government and get the data in order to come up with their own assessment," he said.

According to Vaz, "You can't get growth unless you know where your shortcomings are. I would ask for a little more patience, but I can understand the anxiety."

Holness established the 10-member council with a mandate to achieve a gross domestic product (GDP) growth target of five per cent in four years.

Jamaica, nearing the end of a loan programme with the International Monetary Fund, has averaged less than one per cent GDP growth in the last two decades, slipping from a high of more than 12 per cent in 1970, according to the World Bank.