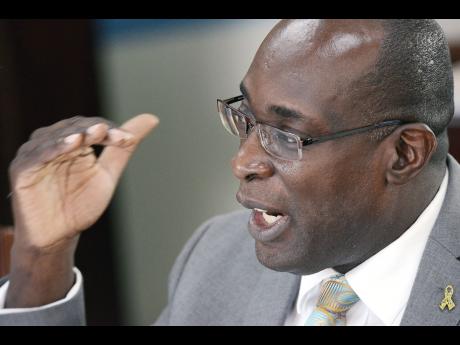 Ronald Thwaites, the opposition spokesman on education, is warning Education Minister Ruel Reid to be careful about the threat that he has issued to the Caribbean Examinations Council (CXC) that Jamaica is prepared to "review" its relationship with the examination body if the Penwood saga does not end favourably.

Jamaica has been lobbying the CXC to award grades to about 40 students of the St Andrew school who were ungraded in six subjects after the school failed to submit samples of their school-based assessments (SBAs) by a July 31 deadline.

Reid yesterday acknowledged a statement by the CXC that the school did not qualify for a hardship consideration. The statement, however, added that consideration was being given under "special circumstances" and that "candidates will be given the grade they justly deserve".

However, it was his threat to review Jamaica's relationship with the examination body if the resolution is not favourable that has left Thwaites and the Jamaica Teachers' Association (JTA) concerned.

"The students sat the exams already. They did their SBAs, and the issue is now the samples. I really think, as I was quoted elsewhere, CXC is just being very difficult. We (the Government) have to make it very clear to them (CXC) that Jamaica is not going to stand for any foolishness, and if they continue with that, we may need to review our own position within CXC," Reid told journalists.

But Thwaites is urging Reid "not to pick a quarrel" with the CXC when it is clearly apparent that there was error on the part of the school, and, maybe, other factors in Jamaica.

"It is to be hoped that this matter can be resolved to the benefit and in the interest of the students.

"There are, indeed, many things in Jamaica's relationship to review, [for example], the costs, which seem to me to be no longer appropriate. [But] why would we want to, in any way, reduce or question our relationship with a pedigreed examination body that has served us so well for so many years?" Thwaites argued.

President of the JTA Howard Isaacs said a review of the relationship with the CXC is not a necessary course of action at this time.

"I'm almost sure I have seen some communiquÈ that says they (CXC) are now accepting the SBAs, so I am wondering why the honourable minister would so communicate. I'm of the view that the ball is rolling."

Reid said he is scheduled to meet with the chairman of the CXC Council, Professor Sir Hilary Beckles, on Monday.

The CXC has accepted the samples but has not said when the grades would be issued.

Penwood said that it had problems with an online submission portal, which the CXC admitted, although it said that in recognition of the problems, it had extended deadlines.

Penwood's principal, Donna McLaren, has also said that the school's exam coordinator did not do like other schools that faced problems and submit physical copies of the samples before the July 31 deadline.

Jamaica is one of the 15 territories that signed the agreement establishing the CXC in 1972.