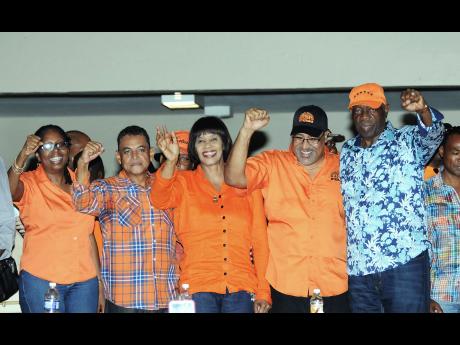 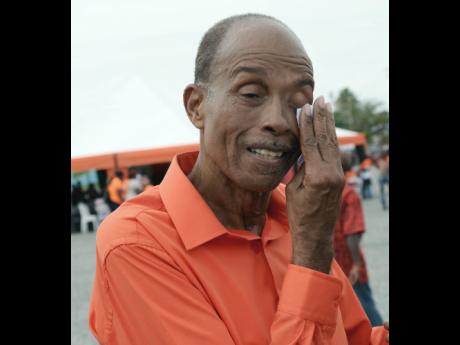 Portia Simpson Miller was in cruise mode yesterday as she crushed her challenger, Dr Karl Blythe, and solidified her reign as president of the 78-year-old People's National Party (PNP). In what director of elections for the internal poll Julian Robinson described as a smooth process, Simpson Miller emerged with 2,471 votes, while Blythe managed only 198 votes as PNP delegates sent the message that they were not ready to part company with the leader they affectionately call 'Mama P'.

Blythe's call for renewal of leadership at the top seems to have fallen on deaf ears as the delegates apparently opted to retain the status quo at this time.

In her victory speech, Simpson Miller told the delegates: "I accept your vote of confidence. I accept your resounding mandate."

With the throng of delegates shouting "One leader!", Simpson Miller said that while she has had setbacks in her political career, she is determined to stay the course.

"You pick him up, you lick him down, him bounce right back," declared Simpson Miller as she quoted lyrics from timeless music from Jamaica's past.

The landslide win came for Simpson Miller amid intense public debate as to whether she still possesses the political gumption to lead the party into the upcoming local government elections, which are expected this year.

While some PNP insiders charged that this would be the last time Simpson Miller would offer herself to lead the party, the veteran politician gave no public indication that she would be going anywhere, anytime soon.

Yesterday's victory gave Simpson Miller number three in PNP presidential polls, with her loss to former prime minister P.J. Patterson in 1992 the only blemish on her personal record.

She was to repel a challenge from Phillips in 2008, and leading into yesterday's poll, she told journalists that she would be returned by an overwhelming majority of votes.

She said Blythe's challenge was welcome and has only made her stronger.

The defeated Blythe had earlier told journalists that his objective was to "make a statement".

He contended that if between 20 per cent and 30 per cent of the delegates had voted for him, he would have accomplished his objective.

According to Blythe, the day he threw his hat in the ring to challenge the incumbent, he had already scored a victory for democracy in the PNP.

"I have energised members of the party to go all over the country, with the leader speaking at every divisional and constituency conference, so already, I have energised the party for the local government elections."

Cracks evident as Comrades vote
Lisa blocked out! - Young MP vows to fight on after defeat
Picking on Portia - Simpson Miller is to PNP as Bolt is to track, says Arscott