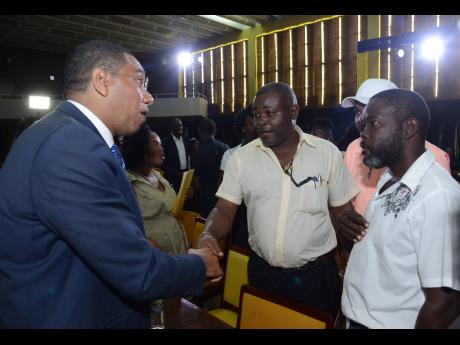 Gladstone Taylor
Prime Minister Andrew Holness speaks with Raymond Leonard (centre) and Steven Whynn (right) of the Belrock Community in St Thomas during the launch of the best schemes competition for 2016-2017, held last Friday at the Jamaica Conference Centre in downtown Kingston.

Prime Minister Andrew Holness has signalled that the Government will be instituting major reforms in the residential housing market in hopes that a construction boom will drive economic growth.

Speaking during the launch of the National Housing Trust (NHT) Best Schemes Competition at the Jamaica Conference Centre last Friday, Holness said housing development within the construction industry is being targeted as the key sector for the Government's growth agenda.

Holness' optimism about the ability of the construction industry to drive growth coincides with views expressed by economist and former head of the Planning Institute of Jamaica, Colin Bullock, who, in a recent Gleaner Growth and Jobs feature, argued that the prospects for the construction industry can be enhanced by concerted efforts to expand residential housing, efforts which Holness wants the NHT to advance.

"The Government's vision ... is to have an organisation that facilitates the building of houses, to facilitate the financing of housing acquisition and housing development," the prime minister said in addressing a reform process of the NHT, which he said is currently under way.

He had previously announced that the Government would be engaging in a review of the NHT aimed at improving the ability of the agency to deliver on its mandate of providing affordable housing. The review was also announced against the backdrop of funds being diverted from the NHT, by successive administrations, to be used for purposes other than intended.

Holness argued that the review is necessary because the NHT has not been doing as much as it could to drive improvements in the housing and construction sector.

The prime minister further noted that the NHT would be engaged in replacing the housing stock of the Kingston Metropolitan Area.

"We have to build houses for the young graduates coming up. We have to build houses to replace some of the housing stock that has just totally deteriorated. When you fly over Jamaica and over downtown Kingston, and you look at the housing stock from a bird's-eye view, you recognise how important it is to have the NHT facilitate a process of regeneration ... . We share your dream of seeing the NHT lead the housing revolution in Jamaica," he said.