Large Abroad | Jamaican appointed as Battalion Commander in US Army 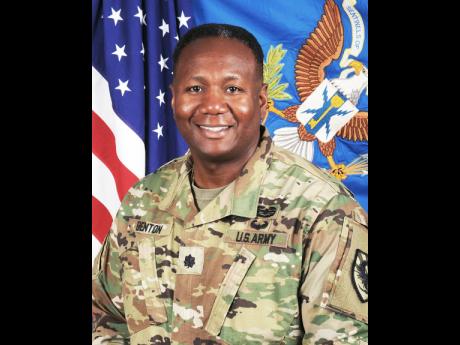 Lieutenant Colonel Mark Denton, a major in the United States Army at the time, tried desperately to prolong the few hours he had left at home the morning he was to be deployed to Iraq. It's two years after the 2003 Iraqi invasion and the military occupation of the Middle Eastern country is in full swing.

After numerous assignments around the world in places such as South Korea, Africa, Kosovo, Yugoslavia, Egypt and Germany, this would have been his most difficult yet.

"Although it is very adventurous to move around and travel the globe every two years, I do not get an opportunity to see my family very often. Although my family is not in the military, they also serve. They sacrifice so much. One moment which stands out as being difficult is when I was deployed to Iraq for a year," he told The Gleaner.

While he had to put on a show of strength in his role as combat adviser for the troops in Iraq, worries about his firstborn constantly weighed on his mind.

LEAVING HIS FAMILY BEHIND

"During this deployment in 2005, my son was only three months old, and that made it hard to leave him behind, but again, duty calls. My wife (Teresa) and son (Zach) meant the world to me. If it were just my wife and I, it would have been demoralising, but I believe it would have been easier to leave," he explained.

With 13 years elapsed and three additional children, the lieutenant colonel now looks back at his Iraq assignment as a watershed moment in his 20-year military career - a career that has culminated with his appointment as commander of the 309th Military Intelligence Battalion at Fort Huachuca, Arizona.

"I was extremely humbled to have this honour bestowed upon me. As battalion commander, I am responsible for the health, welfare and training of approximately 450 soldiers, civilians and their families. As such, it is my job to provide guidance and direct all activities for my battalion to accomplish its mission. The mission of my battalion is to train, develop and educate soldiers to conduct and lead counterintelligence, human intelligence and support operations," he said.

A native of Dumfries in St James, Denton was unabashed in declaring that he uses his foundation and upbringing as a Jamaican to assist him in the way he leads his unit.

"I would often run through the streets of Dumfries barefoot with no shirt on. So much so, it contributed to my nickname. I could be seen every day after school chasing behind the sugar cane trailers en route to the cane factory. I loved to pull strands of cane off the trucks. I would eat so much cane that my stomach would be covered with the sugar from the cane juices, and I became known as 'Sugar Belly' to all the neighbours," he said, as he shared recollections with The Gleaner.

The commander also shared fond memories of helping his grandfather in his butcher shop.

"I would often assist him with prepping and skinning the goats, pigs, chickens and other meats. The best part was creating an impromptu, makeshift wood, outdoor fire and cooking portions of the meat."

The journey from Dumfries has indeed been a long one for Denton, who joined the US military in high school after his family migrated in search of better opportunities.

"Looking back, I think this way of living helped me to constantly be a problem solver. It helped me be humble, knowing where I came from and the hardship we endured as young kids. Although today I consider it hard, back then, I thought it was fun and just our way of life. I have a can-do attitude because of the foundation I received in Jamaica," he said.