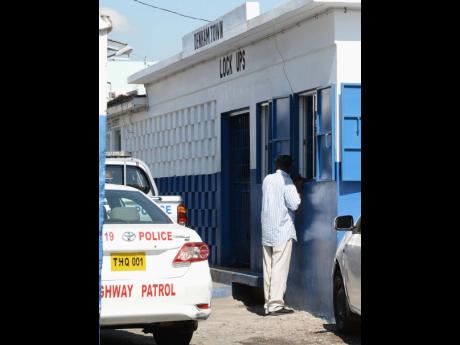 Police are fearful that the recent escape of nine accused men from the Denham Town lock-up could add more fuel to the fire of war already blazing in sections of the Kingston West Divison.

"That division has seen severe crime challenges and the police have done a significant job with the recovery of five firearms for last week, and a major violence producer was also killed in a shoot-out with the police and another arrested," said Assistant Police Commissioner Assan Thompson yesterday.

"We saw a semblance of order being restored, and to have this happen at this time is most unfortunate. You would not want at a time when you are cleaning the streets for them to be further contaminated with persons who might feel obliged to commit crime," said Thompson, correcting earlier reports that four policemen have been interdicted for the jailbreak.

"They have been suspended from pay and duty. It's not an interdiction," he said, noting that the Inspectorate has launched a probe.

Four of Sunday's escapees were from the Denham Town and Tivoli Gardens communities, which have been locked in a heated rivalry that has left at least a dozen persons dead since January.

One of the four, 19-year-old Oshane Morgan of Oxford Street in Denham Town, who was charged with robbery and illegal possession of ammunition, was rearrested while trying to board a bus in the Nashville bus park in Manchester yesterday morning. The other escapees are still on the loose.

Thompson said that coastal security has been bolstered to prevent the men from fleeing Jamaica, and that the police have made contact with the escapees' relatives to warn them against harbouring the fugitives.

The Jamaica Constabulary Force spent more than $120 million last year, some $12.6 million of which at the Denham Town Police Station, to improve security and detention conditions at lock-ups islandwide.

Nonetheless, some 43 detainees escaped from lock-ups last year, the majority of them from recently renovated stations.

Weeks after the escapes, three of the wards were accounted for - one was rearrested, one turned over by his parents, and the other found beheaded while on the run from the police.

Thompson could not say yesterday how many others have been recaptured from last year's batch.