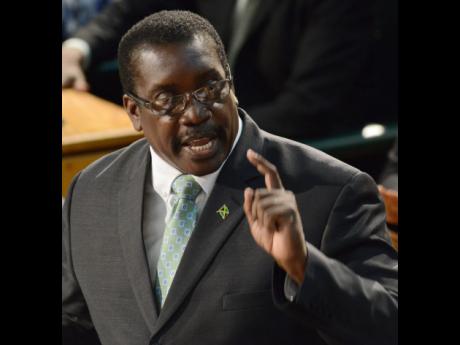 National Security Minister Robert Montague is declaring that the latest flare-up of crime in St James has been contained following the additional deployment of police and military assets to the parish since Thursday night.

He said the activities of the security forces resulted in the capture of the primary suspect, another person of interest, and the seizure of the motor vehicle used in some of the incidents.

However, despite the progress being made, Montague, yesterday morning, painted a picture of an almost helpless police force and army against the rising tide of crime and violence, saying the nation must begin discussing how to provide them with more tools to do their jobs.

His comments came just hours after the police imposed a curfew in Glendevon, St James, in response to the killing of two people and the shooting of several others.

Montague said that while the curfew can help, it is a temporary measure.

"There is nothing between the curfew and a state of emergency, and I would like to place on the table for national discussion, as I've done before, the question of some instrument to put in the toolbox of the security forces that fits between a curfew and a state of emergency for a limited time," Montague declared at the official handing over of a Cessna 150 aeroplane to the Jamaica Combined Cadet Force at the Tinson Pen Aerodrome.

In the meantime, Montague said members of the security forces feel that any action they take to fight crime will come at a personal cost, particularly with the threat of prosecution by the Independent Commission of Investigations.

He said the frustration of the security forces was brought into focus for him as he gave a motivational talk to some members who were headed to St James on Thursday night.

Montague said a young soldier told him that while the public is calling for the security forces to go to St James, law enforcers are torn about how to do their jobs when they encounter thugs willing to take them on.

"If I take him on, he might kill me or I might kill him. If he kills me, my family loses me. If I kill him, my family will also lose," Montague relayed being told by the soldier.

Montague's opposition counterpart, Peter Bunting, has also called for the country to take a serious look at identifying the issues contributing to the current violence and developing short, medium, and long-term responses.

Bunting wants the prime minister to immediately convene a meeting of the security forces, private sector, and civil society to craft an emergency response to address the upsurge of crime in St James and other sections of Western Jamaica.

The national security ministry says a meeting with leaders and stakeholders in Montego Bay and surrounding communities has also been called by Assistant Commissioner Warren Clarke, who is in charge of Area 1, to enlist their support. Montague has encouraged all residents in St James to attend the meeting, the date for which is yet to be announced.