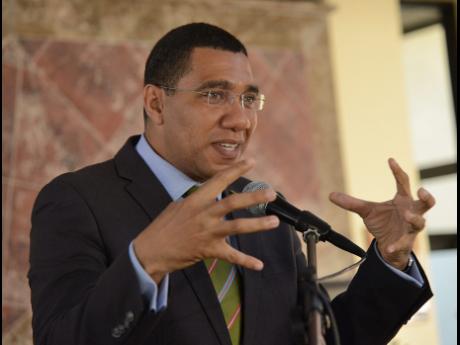 Prime Minister Andrew Holness says the Jamaican Government will not be going ahead with plans to develop a trans-shipment port and industrial park on Goat Islands in the Portland Bight Protected Area.

The development comes only days after the International Monetary Fund (IMF) published the Government's Memorandum of Economic and Financial Policies, which said that the administration was pressing ahead with the project.

Speaking in New York on Thursday night, Holness said that while a trans-shipment project is under consideration, it would not be on the Goat Islands.

He said the Government is keen on growth and development, but the potential environmental fallout makes the Goat Islands unsuitable.

OTHER LOCATIONS IN JA

"There are other locations in Jamaica that would do less environmental damage and probably be just as good strategically," Holness said.

Commenting on the document published by the IMF, Holness said that the Goat Islands project does not accurately represent the decision of his administration.

"The entry into an official document may not have represented the decision of the Government," Holness responded to a question posed on the issue at a town hall meeting.

However, he did not explain how the entry ended up in the document that the Government submitted to the IMF.

The prime minister said he would be making a statement in Parliament to clarify the matter.

Meanwhile, the Jamaica Environmental Trust (JET) said it welcomes the Government's announcement that it would not be developing a trans-shipment port and industrial park on the Goat Islands.

JET said it was looking forward to receiving further information about the alternative locations.

JET is also calling on the prime minister to hold a press briefing on his return to Jamaica to discuss other major environmental decisions that are pending.

Chinese firm China Harbour Engineering Company had expressed an interest in building a trans-shipment port at Goat Islands, but there has been strong pushback from environmentalists.

They claim that such a project would disturb marine life and ruin a significant part of the Portland Bight.