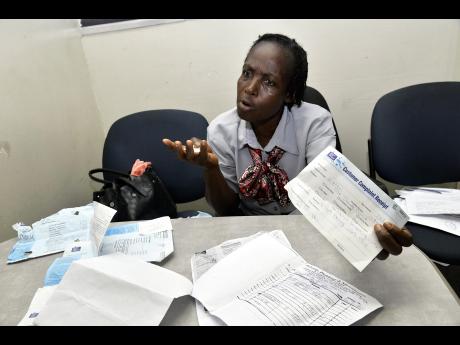 Norman Grindley
Olive Henry displays the Customer Complaint Receipt she received from the NWC along with the other communication and the bills for $175,000 sent by the company.

In a state of utter disbelief, Olive Henry is demanding answers as she faces a residential bill from the National Water Commission (NWC) that would stump some commercial customers.

Henry, who lamented that her plight has been ongoing for more than three months, provided documents to The Sunday Gleaner showing accumulated charges of $123,568.77, which the NWC claimed was a recalculation of estimations.

Henry, who is the landlord for the premises in question at Manley Mews in St Andrew, stated that the tenants who were there up to December last year never incurred such alarming charges.

She said she went to the NWC’s head offices on Marescaux Road in the Corporate Area to query the bill, which she was convinced had to be generated in error.

“I said, no man, this must be a mistake. I asked the lady if this is correct and she said yes. I then went to a gentleman and I said to him, ‘there is nobody living at the premises so the figure could not have been right’,” said Henry.

“I left the NWC and then returned, and when I spoke to a man there, he said that I must have a massive leak at the house.”

She dismissed the suggestion, arguing that, “Even if I have a leak, it would be strange that as the tenants move, leak develop to give me a bill of over $175,000.”

On her August to September bill, the consumption trend showed that Henry had low consumption for eight months – between 0-8 units of reading – but from June to August the reading skyrocketed to more than 100 units.

Deciding to err on the side of caution, Henry had Reliable Plumbing & Maintenance investigate the plumbing system at the premises, at a cost of $6,500. The investigations found no leak, putting to rest the speculation. That report was sent to the NWC.

On July 8, the NWC also sent a team to the location to conduct a high-consumption check. She said that investigation also revealed that there was no leak. This was relayed in a correspondence from the water company to Henry on September 5, 2016.

She also told The Sunday Gleaner that although construction was under way on a section of the house, the activities involved could not have utilised that much water.

“I wrote a letter to them and tell them that the (water) meter needed to be investigated and they sent me a letter,” said Henry, as she displayed the communication from the NWC.

“Kindly be advised that your request highlighted will be investigated by our customer care officer ... You will be advised of our findings on or before October 6, 2016.”

However, even with that letter, she is not convinced that the NWC is investigating the issue transparently.

“How can water commission investigate the something and they have not called me in the house (for them) to see if the meter is spinning fast and to see what cause the issue?” she questioned.

“What kind of investigation could have been done when the place is locked up? They went and took out the meter without checking the real issue.”

According to Henry, up to last week, no one from the NWC had reached out to her regarding the matter.

When contacted, corporate communications manager at the NWC, Charles Buchanan, said Henry’s complaint was being looked into.

But he argued that the NWC could not just write off an amount because it was unusually high.

“If the water was delivered on the property, it is the customer’s responsibility to make the payment. It is water that the NWC would have delivered to that property. Even if it was wasted, it is still water that we would have paid a lot of money to treat, produce, and deliver,” stated Buchanan.

He argued that human error in reading and recording the measured amount is a possibility, even while he defended the integrity of the process used by the utility company.

“We have mechanisms in place to safeguard against error. Not to say it cannot happen, but there are mechanisms we have including on the electronic devices we use,” Buchanan explained.