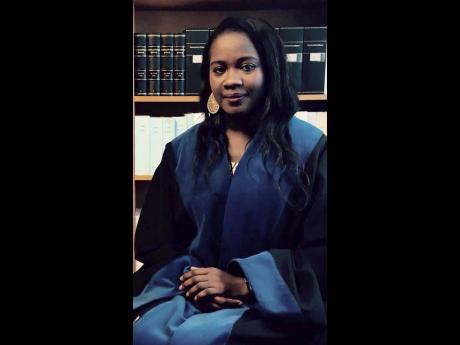 Iceland is a country of sharp contrasts. In this Nordic island, one can find fire and ice coexisting in the same location and also experience the darkest of winters preceded by summer days, where the sun shines even at midnight.

The contrast reflected in the staff complement of Icelandic law firm Rettur - Adalsteinsson & Partners, where Claudie Wilson is the only black lawyer, is also equally striking.

Having migrated to Iceland at age 18, Wilson expertly navigated her way through the Icelandic tertiary-education system to fulfil her dream of becoming a lawyer.

Wilson says she hopes to continue this trend as she has her heart set on becoming one of the nine Supreme Court justices in Iceland.

For the time being, however, her work at Iceland's leading firm for human-rights enforcement and her 10-year-old twin sons consume much of her attention.

"I was delighted when my application to intern with the firm was accepted in 2013. Upon completion of my four-week internship, I continued working at Rettur as a paralegal. I graduated in 2014, and I was subsequently hired in a full-time position. Today, I specialise in immigration and refugee law, but I have also expanded my practice areas to include insolvency and company law," she said, while explaining how she landed the job at Rettur.

Wilson told The Gleaner that she decided to migrate to Iceland after meeting her sons' father, a native of the Nordic country.

"I remember clearly the reaction of my family and friends when I told them I would be migrating to Iceland. Some questioned my choice and found it absurd for a Jamaican to migrate to, while others considered Iceland not to be 'foreign' in the Jamaican sense of the word," she said.

While not disputing that adjusting to a Nordic existence had its challenges, Wilson was quick to dispel the perception that Iceland is the coldest place on the planet.

"Surprisingly, winters here are often better than winters in England, certain states in the United States, including New York, as well as Canada."

According to Wilson, her ambition to earn a space in law school helped her overcome her fear and self-doubt to master the Icelandic language. Her determination in this regard was fermented even more after her application to Reykjavik Law School was initially turned down due to concerns that she was not a fluent Icelandic speaker.

Having conquered that hurdle, she went on to do advanced studies in European refugee law and immigration policy. Her master's thesis focused on the Dublin Regulation, a piece of European Union (EU) legislation that governs asylum seekers in EU member states.

Apart from being heavily involved in immigrant matters in Iceland, Wilson has a very active family life and meets regularly with several other Jamaicans who live on the Nordic island.

"I am a single mom with a pair of identical twin boys. They will turn 11 in December. My sister migrated here in early 2004. She also lives here with her family. There are other Jamaicans who reside here, so we support each other and sometimes meet for a good old-fashioned cookout. There are Jamaicans who've resided here for up to 40 years," she said.

While noting that legislative and policy changes on immigration would make it virtually impossible for Jamaicans to migrate to Iceland today, Wilson believes that there is room for the diplomatic ties between both countries to be enhanced.

"In my view, a starting point towards creating opportunities for Jamaicans in Iceland would be to strengthen those diplomatic relations. I am convinced that a strong relationship between both countries could be mutually beneficial to their citizens. Icelanders have been and continue to be fascinated with the Jamaican culture, so there is definite potential to create opportunities for Jamaicans in Iceland," she said.