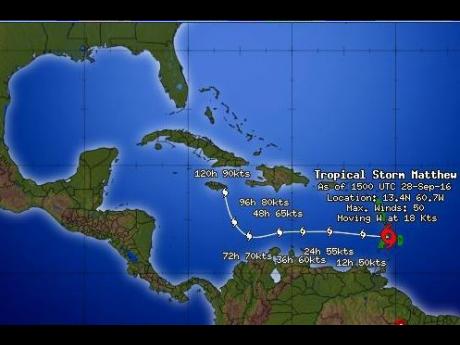 The Meteorological Service has issued a severe weather alert for Jamaica as it prepares for the possible impact of Tropical Storm Matthew.

The Met Service says the alert will remain in effect until 5:00 a.m. tomorrow.

According to the Met Service, Tropical Storm Matthew could become a hurricane by Friday and so fishers on the cays and banks are advised to begin preparations with a
view to evacuating, should it become necessary.

Tropical  Storm  Matthew  formed  near  the eastern Caribbean  this  morning .

Tropical  Storm  Matthew  is  moving  towards  the  west  near 33 kilometres  per  hour  and a westward motion with some decrease in forward speed is expected during the next couple of days.

The  Met  Office  says  on the forecast track, the centre of Tropical Storm Matthew  will  move  through the Windward Islands during the next couple of hours,  and  move over the southern and central Caribbean Sea on Friday.

It will then move  closer to Jamaica and pose a direct threat to the island.

Tropical  Storm  Matthew  has  maximum  sustained  winds  near 95 kilometres  per  hour  with  higher  gusts  and  is  forecast  to gradually strengthen during the next couple of days.