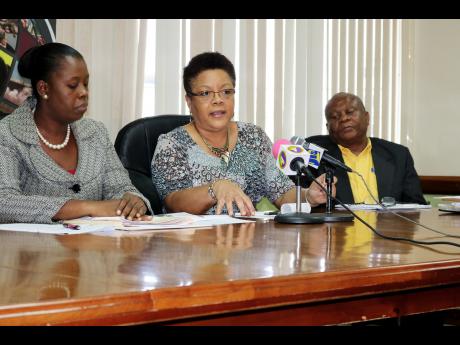 Christopher Serju
Dr Elizabeth Johnson, country representative for the Inter-American Institute for Cooperation on Agriculture, makes the point that the frosty pod rot disease can be controlled but proper analysis of the scope of the infestation is key to informing the appropriate course of action to be taken. Also sharing in the occasion are Sanniel Wilson, chief plant quarantine officer/produce inspector (left), and Leroy Grey, secretary manager of the Cocoa Industry Board. 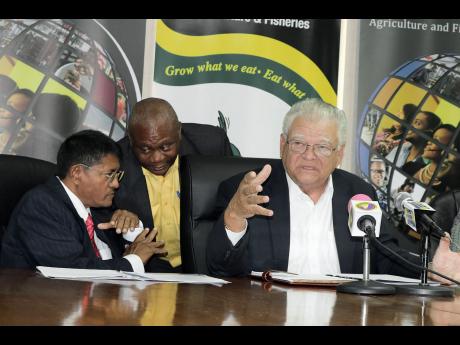 Christopher Serju
Reginald Budhan (left), acting permanent secretary in the Ministry of Industry, Commerce, Agriculture and Fisheries, gets a quick update on the status of the frosty pod rod cocoa infestation from Leroy Grey, secretary manager of the Cocoa Industry Board, as Agriculture Minister Karl Samuda speaks about plans for controlling and eradicating the highly contagious disease.
1
2

The Inter-American Institute for Cooperation on Agriculture (IICA) will continue to provide technical expertise and financial assistance to the Ministry of Industry, Commerce, Agriculture and Fisheries to control and eradicate the highly contagious frosty pod rot cocoa disease.

Independent confirmation of the disease in Jamaica, a first for the Caribbean, was communicated to the Government Wednesday by the Centre for Agriculture and Bioscience International (CABI) out of the United Kingdom, triggering an emergency press conference at the ministry's offices in New Kingston.

"This is a serious outbreak," Agriculture Minister Karl Samuda said as he disclosed that a nationwide quarantine on the transportation of cocoa pods, seedlings, cuttings, or any other plant material is in effect. This is despite the fact that the disease has only been confirmed from a sample from a farm in Clarendon.

In effect, this means, among other things, that unless the chief plant quarantine officer gives someone written permission to do so, a person who operates a cocoa orchard shall not move or sell any cocoa pods within or outside the parish in which that orchard is situated. Such extreme action is necessary because though the spores of this disease, caused by the fungus Moniliophthora roreri, are usually dispersed by wind or water, they are far more likely to be spread by human activity.

For this reason, researchers have described it as a disease with a limited geographic range but unlimited potential for damage.

"The spores of the frost pod can actually be spread via human clothes, hair, etc, and that's why this order is actually important because it's a highly contagious disease. Not every plant disease is spread by human activity, and this makes this [one] a little bit different, so we need the entire country to respond. Tell us where it is so we can effect the necessary measures urgently," Sanniel Wilson, chief plant quarantine officer/produce inspector, told The Gleaner.

The disease was first confirmed locally after a farmer in Clarendon noticed a strange fungal growth unlike anything he had ever seen before and reported it to the Cocoa Industry Board.

Thereafter, with the independent confirmation by CABI, the Government reported the matter to the international community in keeping with its obligations under the International Plant Protection Convention.

This was despite only one confirmed case in the parish where 70 per cent of Jamaica's cocoa cultivation takes place.

But this is a crop that is cultivated commercially in 13 of the island's 14 parishes - Manchester being the exception.

Wilson explained: "Because of the nature of the spread of the disease, we had to declare the country infested until we could identify specifically in what parishes there are reports or suspected cases."

However, Dr Elizabeth Johnson, the IICA representative to Jamaica, underscored the importance of a proper pathway analysis to determine how the disease got to Jamaica in the first place as a critical component in determining the effective control and eradication strategy.

"It can be controlled," Johnson, an agronomist with specialised training in crop science and biotechnology and who has done extensive research in molecular genetics, assured those in attendance at the press conference.

"There are a number of options; however, we need to first have a good and clear picture of what we're dealing with to put the appropriate action in place. When we actually have an idea of the scope of the spread, then we can finalise the best action for this particular pest in Jamaica," she said.