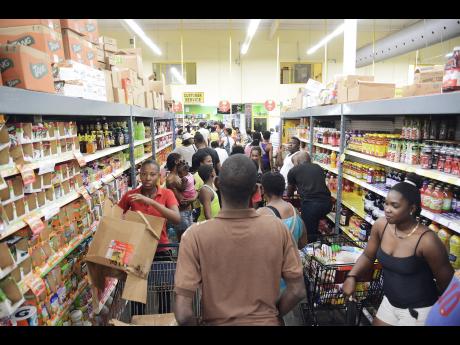 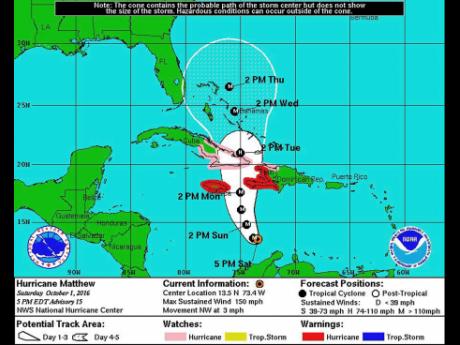 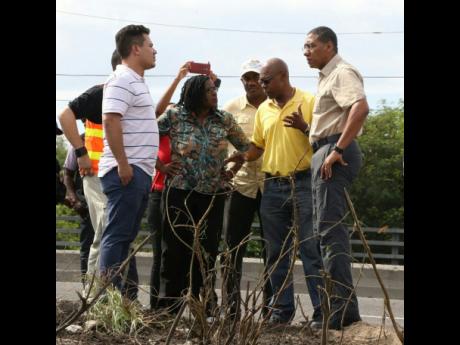 Prime Minister Andrew Holness (right) and officials of government agencies during a tour of the island yesterday to check the state of readiness for Hurricane Matthew.
1
2
3

With the dangerous Hurricane Matthew continuing to drift towards Jamaica’s eastern coast, Prime Minister Andrew Holness has expressed fear that the system, which is fluctuating between the maximum Category Five and Category Four, could blow the economy off course.

Holness’ fears are shared by Dr Parris Lyew-Ayee, chairman of the National Works Agency (NWA), who has warned that Matthew has the potential to be the most deadly natural disaster to hit the island.

“The biggest concern is the impact on the economy,” Holness told journalists yesterday during the first leg of a tour of sections of the island which could be most impacted by Matthew.

With a hurricane warning still in effect for Jamaica, Holness added that: “This weather event could derail our economic programme, but we are determined not to let that happen by the speed of recovery. We are ensuring that all government agencies understand that they have a role in the speedy recovery. That speedy recovery will ensure that our economy does not suffer unnecessarily.

“Of course, on a local level, community level, we expect that we will see significant damage to property and dislocation and human suffering that will come from such an event if we do not prepare. It could be significant.”

Hurricane conditions are expected to reach Jamaica by tomorrow, but tropical storm conditions could hit the island by late this afternoon into tonight, making outside preparations difficult or dangerous.

Matthew is expected to produce two to four inches of rain over western Jamaica today into tomorrow, with possible isolated maximum amounts of six inches.

However, eastern Jamaica will be hit harder, with Matthew expected to produce total rain accumulation of 10 to 20 inches with possible isolated maximum amounts of 25 inches.

This rainfall will likely produce life-threatening flash floods and mudslides.

The combination of a dangerous storm surge and large and destructive waves could raise water levels by as much as three to five feet in Jamaica’s coastal areas, putting residents of these low-lying communities at risk.

Swells generated by Matthew are expected to affect portions of the coasts of Jamaica, and these are likely to cause life-threatening surf and rip current conditions.

This has prompted Lyew-Ayee to stress that places such as Annotto Bay, Port Antonio and Manchioneal in Portland could see some serious storm surges and wind.

“What happens is that these are coastal communities that are already experiencing a lot of land loss due to climate change. With Matthew, you are going to have counterclockwise winds coming from the north east; that’s going to stare those communities right in the face. So we are expecting some serious storm surge,” Lyew-Ayee told The Sunday Gleaner.

“This is unprecedented. We have not had a storm of this intensity approaching Jamaica. This is stronger than Gilbert (1988), stronger than Ivan (2004), so we have to take it serious,” added Lyew-Ayee.

It is with this in mind that the prime minister has urged Jamaicans to make it their priority to prepare and keep abreast of the updates from the various agencies.

He appealed to residents in low-lying areas to take the projections seriously and take the necessary precautions.

“We have not yet issued any evacuation warnings, (but) I’m urging all Jamaicans to pay close attention to the warnings that will be given from the police, the disaster preparedness units, the NWA, and generally from the Government.

“They are all in your best interest, but even outside of the Government reaching the point of issuing an evacuation order, I’m encouraging Jamaicans to take personal responsibility for their safety and security,” said Holness.

The prime minister expressed satisfaction at the current state of readiness by the relevant agencies and said he is hoping that there will be minimal loss of lives or damage.

“I am very satisfied with what I have seen. They are prepared, they have systems to gather information, they are able to direct resources and they have assured us that they have prepositioned equipment and manpower just in case of any eventualities,” said Holness.

“We can’t predict what the storm will do. What we know is that we will be impacted by the storm. All the models show that Jamaica will be in the 90 per cent effect band of the storm. What we have control over is our ability to prepare, and we hold firmly to the view that our preparation can reduce loss of life and damage to property and treasure,” added Holness.