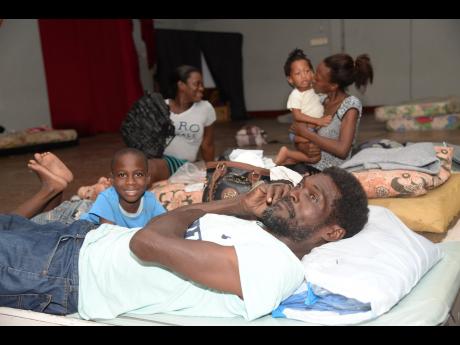 Jermaine Barnaby
Persons prepared to ride out the impact of Hurricane Matthew at a shelter in Port Antonio, Portland. 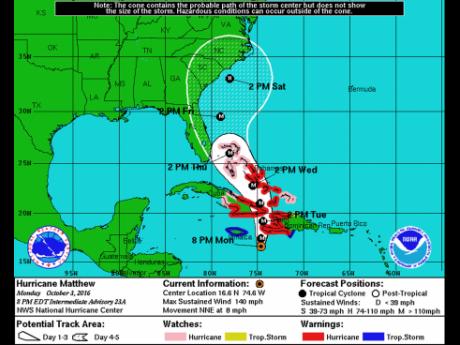 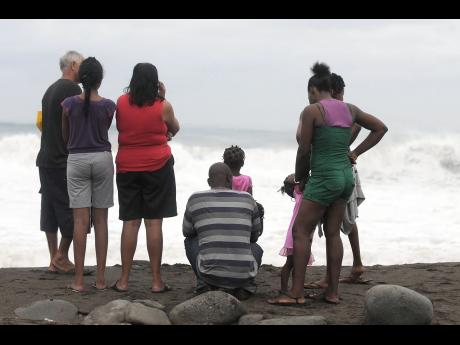 Gladstone Taylor
Scores of persons flocked to the Palisadoes strip in St Andrew yesterday to view the large waves crashing along the shoreline.
1
2
3

Local Government Minister Desmond McKenzie is standing by Government's decision to maintain the Jamaica's state of preparedness to its highest level, even as the Met Service downgraded the hurricane threat to a tropical storm warning and the Category Four system Matthew meandered its way into the Central Caribbean.

"Despite the downgrading from a hurricane warning to a tropical storm [warning], the Government will maintain the Level Three, the one which we have been for the last two days," McKenzie said as he updated the nation during a press briefing at the Office of Disaster Preparedness and Emergency Management (ODPEM) yesterday evening.

"This will allow us to conduct any search and rescue that may be necessary after the passage of the storm."

On Matthew's current projected path, Jamaica was likely to face tropical storm winds and increased rainfall starting at 2 this morning.

McKenzie said the Government was not prepared to relax, despite the downgrade, and reported that up to late Monday, 158 hurricane shelters were opened across Jamaica catering to about 3,500 persons.

The parishes with the largest numbers of persons in shelters continue to be St Thomas, Portland and Kingston. The shelters are, for the most part, schools in the affected areas.

McKenzie said this would mean that schools will continue to be closed pending an assessment after the passage of the hurricane.

McKenzie said he was prepared for the likely backlash if Jamaica is spared the full brunt of Hurricane Matthew.

"I know that after the dust has settled, we will get questions and some level of criticisms, but this is Jamaica, and we have to appreciate and accept that what we were doing was not just being done locally but it was a system that was being monitored internationally," McKenzie said, noting that all those who are knowledgeable had Jamaica as one of the places likely to be affected by the hurricane.

McKenzie's comments come two months after local authorities faced criticism for appearing to have overreacted to the threat of Tropical Storm Earl in August.

McKenzie said while it was early, the relevant agencies were already looking towards recovery after the passage of Hurricane Matthew. He reported that already the National Works Agency and contractors China Harbour Engineering Company have cut a temporary channel across the Marcus Garvey Drive.

He said this would mean that some sections of the major thoroughfare will remain closed, allowing for wastewater from the Shoemaker Gully to flow freely while construction of a new bridge continues.

In the meantime, Jamaica Urban Transit Company buses could be back on the road today if ODPEM gives the okay.

"We are prepared to get back to work tomorrow (Tuesday), but as a public entity we are expected and obliged to adhere to the national disaster management stipulations. So until we get clearance from ODPEM, we won't arbitrarily be just re-engaging the service, because the question of public safety is paramount," Reginald Allen, JUTC communications manager, told The Gleaner last night.

The JUTC had pulled its buses from regular service in light of the threat from Hurricane Matthew.

"Although we are hearing now of a tropical storm warning, we are not hearing that we are out of danger," Allen declared, explaining the company's decision to await clearance from ODPEM.

Christopher Serju contributed to this story.