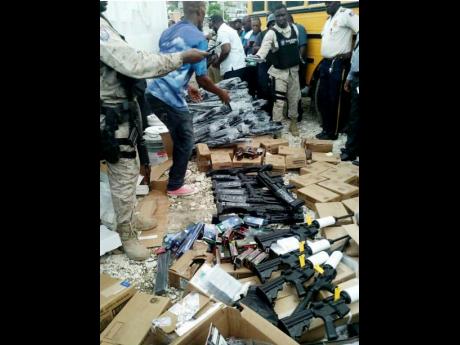 An arsenal of close to 100 brand-new high-powered firearms and hundreds of assorted ammunition were seized by the police in Haiti.

AN ARSENAL of close to 100 brand-new high-powered firearms and hundreds of assorted ammunition were confiscated by the police in Haiti just over a week ago, and Jamaican law-enforcement authorities have indicated that several of them were destined for Jamaica's criminal underworld.

In a photograph obtained exclusively by The Gleaner, Haitian police and military personnel were seen inspecting several of the weapons, which included automatic rifles and handguns.

Jamaica's police chief Dr Carl Williams has revealed that the Jamaica Constabulary Force (JCF) has taken "great interest" in the arms find, even as he lauded the Haitian police for the seizure.

"That's not something that we can take credit for, but we are very happy about the seizure because it is very possible that many of those weapons would have ended up here in Jamaica," Williams told The Gleaner yesterday.

Fears that the weapons were headed for local shores, according to Williams and other top law-enforcement insiders, were fuelled by reports from the Haitian police that they were confiscated in an area frequented by criminals involved in the guns-for-drugs trade between Jamaica and its Caribbean neighbour.

"We know that that is one of the points from which weapons are shipped to Jamaica," the police commissioner said.

Williams indicated that he saw photographs of the arms cache and acknowledged that the amount was significant.

"It is a whole lot a weapons. I saw the photographs and there were a lot of weapons," he emphasised.

"Based on our experience, they look to be brand new, and some of them were in packages."

Since the start of the year, 919 murders were recorded across the 19 police divisions islandwide up to September 23, an increase of 2.6 per cent when compared with the 896 murders recorded over the corresponding period last year.

According to the police, close to 60 per cent of those killings involved the use of guns.

In addition, police statistics show that since January 1, just over 200 murders were recorded in St James alone, the second straight year that the parish has surpassed the 200-murder mark. St Catherine recorded 147 murders, while the Clarendon police have reported 107 killings so far this year.

Assistant Commissioner of Police Warren Clarke, head of the Area Four Police, has blamed the deadly lottery scam and the guns-for-drug trade for the proliferation of guns, not only in St James, but across the country, which he said play a significant factor in the crime wave.

Clarke, who was speaking during an interview with a Gleaner special assignment team that visited Montego Bay recently, said purchasing firearms has become the first order of business for persons involved in lottery scamming.

"When they have the proceeds of scamming or drug trafficking, a gun seems to be the first item they equip themselves with, and because there are so much proceeds flowing from these illegal activities, then there are a lot of guns and ammunition that go with them," he reasoned.

Clarke added, "I accept that there are more illegal guns in St James than we are comfortable."