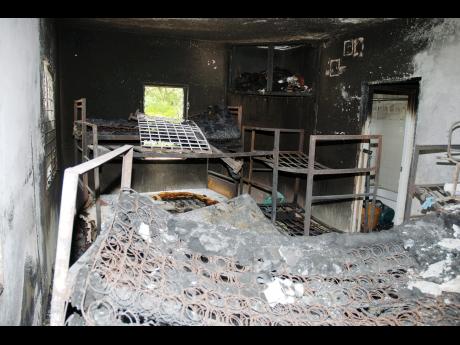 Contributed
The burnt-out room at the Armadale Juvenile Correctional Centre in St Ann where five wards were killed in 2009. Two others succumbed to injuries shortly after.

Six former wards at the Armadale Juvenile Correctional Centre destroyed by fire in 2009 are to get millions of dollars following their victory over the Government in their bid to get compensation for breaches of their constitutional rights, Children's Advocate Diahann Gordon Harrison has said.

She, however, said that she could not immediately say how much money each girl will get.

"I'm not able to say definitively now because once an award is given there are all kinds of costs, taxation that's included, but they did get in excess of one million, each of them," she said.

Seven girls lost their lives and others were wounded in the fire at the St Ann-based facility, which put Jamaica's treatment of persons in state care under scrutiny.

Yesterday, Supreme Court judge Kirk Anderson entered an oral judgment in favour of six of the girls who, while not physically affected by the fire, had sued the Government over their treatment at the facility.

"This is a victory! The Office of the Children's Advocate had instituted suits against the Government for the way in which the girls were treated, the manner in which they were housed, and, ultimately, breaches of their rights, in terms of humane treatment and care conditions," Gordon Harrison said.

She added: "This really is a huge victory for the girls. We think that it's something that should put girls along the continued path to really dealing with the issues that they have - we're not saying that money is going to cure everything."

When the suits were filed in 2011, the Government had insisted up to yesterday that it would not give any compensation.

However, it yielded yesterday after reviewing the case, including reports from psychologists on how the girls were affected by the conditions at the juvenile centre.

The awards in favour of the girls, now adults, are expected to influence how the Government and the courts will treat 26 other cases arising from the Armadale situation.

"The other 26 cases clearly now stand in very good stead. We had selected these six as test cases to see how the others would go. The other 26 claimants have a lot to look forward to," the children's advocate said.

A condition of the judgment is that the women would receive ongoing psychological treatment and support.

"This is definitely welcomed news and a step forward. I would hope that the Government makes all arrangements for these payments to be made in an expedited manner," Susan Goffe, spokesperson for Jamaicans for Justice, said last night.

Jacqueline Samuels Brown, the lead lawyer for the claimants, said it was hoped that the recommendations arising out of the report of the Armadale Commission of Enquiry and judgment yesterday will ensure "continued improvement" in the care of minors who are wards of the State.

In a widely received report, the commission chairman, retired Justice Paul Harrison, described the actions of June Spence-Jarrett, the then commissioner of corrections, as "uncaring, inhumane and negligent" after 23 wards at Armadale were placed in an office dormitory meant to accommodate only five.

Last August, Constable Lawrence Burrell, the sole person charged over the fire, was freed after the Crown conceded that it could not prove he lobbied for a canister to be thrown into a cramped dormitory, causing the fire.

It was said the authorities were called in to respond to "rowdy"-behaving girls.

A skills training centre now operates where the juvenile facility was.