Jamaica gets firm vote of confidence from IMF 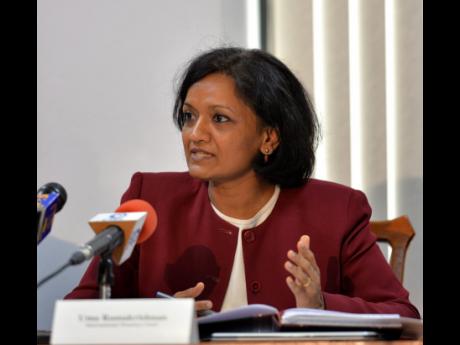 The Executive Board of the International Monetary Fund will, next month, consider Jamaica's request to enter into a new arrangement with the Fund, effectively replacing the current Extended Fund Facility (EFF) with what is being called a precautionary Stand-By Arrangement (SBA).

In a joint media release from the Jamaican Government and the IMF yesterday, it was revealed that the Fund's representatives and Jamaican authorities reached a staff-level agreement on a new economic programme for the country that would be supported by a 36-month SBA with the IMF. This will allow Jamaica to access Special Drawing Right (SDR) 1.2 billion (equivalent to 312 per cent of quota or about US$1.7 billion). If approved by the IMF's executive board in November, SDR 300 million, or about US$430 million, would immediately be made available to Jamaica.

"Given the Bank of Jamaica's comfortable foreign reserves position, the Jamaican authorities have indicated their intention to treat the SBA as precautionary, that is, effectively, an insurance policy against unforeseen economic shocks that are beyond the control of Jamaica," the joint release stated.

"This new proposed programme, and the important commitment of IMF resources that it entails, is a firm vote of confidence in Jamaica. The request to move to a precautionary arrangement is a sign of strength and reflects the policy credibility and strong macroeconomic management of the Government," the IMF-Jamaica Government statement said.

The IMF is of the view that Jamaica has made "commendable progress" in its economic adjustment programme over the last three and a half years under the EFF.

Under the EFF, the IMF said that fiscal discipline and proactive debt management have helped reduce public debt by more than 25 per cent of gross domestic product.

According to the joint news release, macroeconomic stability in Jamaica is becoming entrenched as evidenced by low inflation, the build-up of foreign currency reserves, and a decline in the current account deficit. Additionally, important reforms are being undertaken to unlock Jamaica's growth potential.

Both the IMF and the Jamaican Government acknowledged that a renewed focus on growth and job creation was needed. The SBA is aimed at sustaining macroeconomic stability, boosting employment, raising the living standards of the Jamaican people, and progressively reducing a poverty level that remains too high.

The Government's goals - which the IMF staff team will recommend that the IMF's Management and Executive Board support - are to:

(i) re-orient public resource allocation toward infrastructure, social protection, and security-related spending, while transforming the public sector to be more efficient and delivery-focused;

(ii) modernise the monetary policy framework and build the foundation for an eventual move to inflation targeting;

(iii) bolster the resilience of the financial system; and