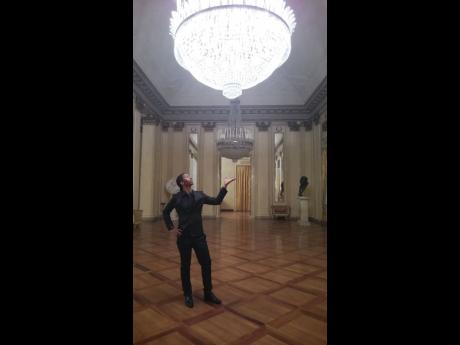 Known as the global capital of fashion and design, Milan is home to The Politecnico di Milano (Polimi), where Stanley Sutherland, a past student of St George's College, has chosen to pursue a first degree in architectural design.

The Politecnico di Milano is Milan's oldest and most prestigious technical university,

His desire to study in Italy grew out of what one could perhaps describe as a 'light bulb moment'.

Even though he had passed it numerous times, Sutherland, for the first time, noticed the German Embassy, located on Waterloo Road, during his regular drive to school while he was in fifth form. It was this moment that triggered his thoughts of an education overseas and changed the entire trajectory of this life.

"I saw it for one full second, and as the car passed, I couldn't get it off my mind and why it looked the way it did, so I asked mom which building it was, and she told me it was the German Embassy. Then after a couple seconds, and to be honest, I don't know why I said it as I didn't think of it, it just came out. I asked mum, 'What if I was to study in Italy?'," he told The Gleaner, while explaining the motivation for his move to Italy.

SURPRISED BY HIS MOTHER

Given that he did not receive an immediate response to his question, Sutherland had all but forgotten he had asked it, but, to his surprise, his mother had already been preparing the way for him to study in Milan.

"A week later, my mother surprised me by taking me to the consulate's office, where we discussed which universities I should consider. I chose Politecnico Di Milano and applied before CXC and my application was evaluated and I was 'pre-accepted', and, thus, I was invited on their campus in Italy to take their entrance examination that September. I passed their exam and the rest is history," he said.

Now in Italy for five years, Sutherland describes his experience in the European country as a true adventure. Not only has he learnt new ways of cooking, but he has also adopted Italian as a second language and embraced the vibrant culture.

"Life in Milan is great. Italy has a lot to discover. I still have a lot to uncover. It is a very beautiful country ... here good food can be cheap at the street markets. Milan has the annual fashion week and design week, there are constant events with famed musicians, many art galleries and museums," he added.

He also shared that he has had the opportunity to travel to other European countries as part of his studies at the Politecnico Di Milano.

His studies in architectural design expose him to the integration and combination of other disciplines and is structured around workshops and courses aimed at imparting the artistic and technical skills of architecture.

In order to successfully complete the programme, Sutherland will be required to intern in an organisation that suits his architectural and design interest. He pointed out that the programme also includes seminars, conferences, workshops, and exhibitions in which students have the opportunity to meet with architects and scholars active in the field.

"Polimi, is a great experience for the bachelor's. The architectural design course is available in English, though to be honest, a number of professors in a few courses aren't fluent, but it's sufficient to get the idea and at night further the earlier lesson with personal study," he explained.