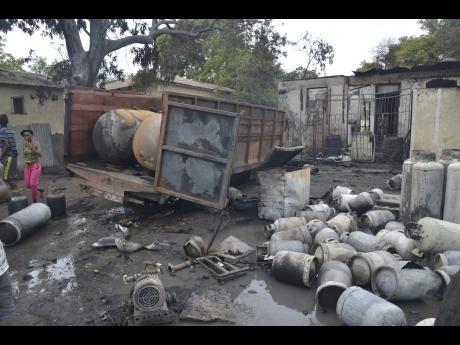 Norman Grindley
An explosion occurred at an illegal cooking gas operation behind a house on Jacques Avenue, leaving the home and a truck destroyed by fire. 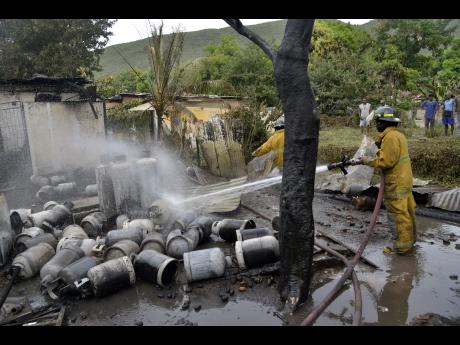 Norman Grindley
A fire fighter carries out cooling down operations at a local cooking gas operation behind a home on Jacques Avenue in Mountain View, St Andrew, yesterday.
1
2

The unwillingness of residents to provide any information has stymied the investigation of firefighters who responded to a call at 2:40 yesterday afternoon about a house on fire at 3 Jacques Avenue (off Jacques Road) in eastern Kingston.

The fire, caused by an explosion at what police subsequently confirmed to be an illegal LPG refilling plant, resulted in five people sustaining third-degree burns. At least two of the victims are believed to be children.

At 2:42 p.m., firefighters from the Rolling Town Fire Department, who were first on the scene, sent a request for all available units to respond.

They had come upon a scene where several cooking gas cylinders filled with propane gas were exploding.

This triggered a response from York Park (two units) and Half-Way Tree, resulting in a combined 25 firefighters from four trucks engaging in controlling the explosive situation.

In addition to the many 25lb and 100lb cylinders scattered around, two 1,000lb capacity cylinders were resting in a truck at the back of the house, which, by then, was also ablaze.

Assistant Superintendent Courtney Thompson of the fire brigade told The Gleaner that despite the unexpected challenge, the firefighters were equal to the task.

"Because we are professionals, we know how to contain these fires, and it wasn't as difficult as some may think. We used two large jets (of water) to contain the fire to get it under control. The threat is still there, but it's minor, and we are cooling down the cylinders to prevent the chances of them igniting," Thompson explained.

However, getting even basic information about the occupants of the house or type of activity conducted on the premises proved to be much more of a challenge, according to the senior firefighter.

"It's difficult because we are trying to ascertain information and everyone seems to be dumb, mute. No one seems to be readily available to talk about what transpired - as if they are hiding something. But we are not here to prosecute anyone. All we are here to do is find out how the fire may have started, but everyone seems to be mute."

The house, a truck, a motorbike, and a car parked in the yard were destroyed, with a full-grown East Indian mango tree also going up in flames, prompting residents next door to empty the furnishings from their house in anticipation of the fire jumping the fence.

The Jamaica Fire Brigade has put the estimate of damage at $38 million, with an estimate of risk at $48 million.

Explosions were so loud that residents of McGregor Gully ran out of their houses, thinking they were in their community, while residents in the vicinity of the fire recalled how the "ground shake".

Meanwhile, Andrew Swaby, councillor for Vineyard Town, told The Gleaner that he was just learning of what seemed to be a cooking gas refilling operation, which would have been illegal in the residential area.

He described it as a "bad situation", especially in light of reports that two of the five persons injured during the explosion were children.

"We have to understand that while things are tough and people are trying in any way to make a money, we can't put our residents at risk. I wasn't aware of this situation before. Obviously, the community was aware, and we have to educate people that activities like this cannot be tolerated in communities," he said.