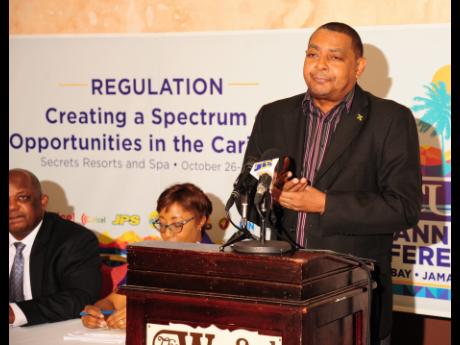 Okoye Henry
David Geddes, executive director of OOCUR, addresses the launch of the conference yesterday. Also in the picture and partly hidden are Albert Gordon, the chairman of OCCUR and director general of the OUR; and Elizabeth Barrett Marsh, public education specialist at the OUR.

access to water and the need to invest in local water and sewerage infrastructure are among the key issues to be put on the table at next week's Organization of Caribbean Utility Regulators (OOCUR) 14th Annual Conference in Montego Bay.

Director general of the Office of Utilities Regulation, Albert Gordon, said that the OOCUR is expected to benefit greatly from information shared by its regional colleagues on how to improve these issues currently affecting Jamaica's utility sectors.

He made this known while speaking at yesterday's launch held at the Wexford Hotel in the western city.

"That is a problem that is critical in Jamaica right now," said Gordon, who is also the chairman for OOCUR.

"There will be presentations from the Inter-American Development Bank (IDB) on how we (Jamaica) can get more investment in water, given the constraints of the Government, on how we can have more public-private partnerships play a more critical role in water," he explained.

It was noted that Clarendon and 16 other towns across the island are currently in need of a central sewage system.

"There are things that need to be strengthened. We don't have a water sector law that can facilitate more people coming in and providing alternatives to NWC (National Water Commission). How do we incentivise others to come in? Because NWC cannot do it," Gordon outlined.

In addition, net neutrality, Internet access to broadband, as well as factors relating to electricity generating capacity, sustainability and use of alternative fuel source are among the issues to be discussed between the region's utility regulators at the upcoming three-day event.

The conference, which will span October 26 to 28, will be hosted at the Secrets Resorts and Spa that is situated at Freeport, Montego Bay.

More than 150 participants from more than 20 countries have already registered to be in attendance.

Some of the countries already confirmed are St Lucia, The Bahamas, The Cayman Islands, St Kitts and Nevis, Barbados, and Guyana. Representatives from a number of Central American countries, as well as from the United States, Canada, the European Union, and United Kingdom, will also be in attendance.

The conference will be looking at utility services to ensure that service providers are playing their role in driving development in the region, as well as the quality of services, customer experience, access to service, affordability, sustainability, recommendations for improvement, and more.

"OOCUR's objective is to provide an environment and mechanism for members to benefit from the sharing of expertise," said David Geddes, executive director of OOCUR.

Utility sector leaders across the Caribbean to probe for opportunities