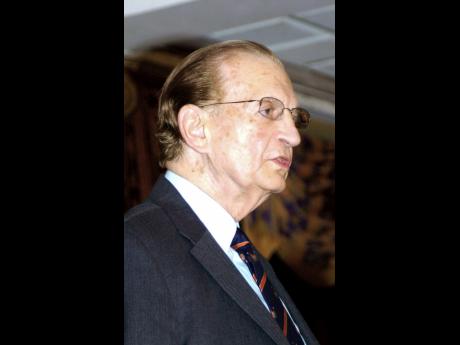 Even while making it clear that his role as chancellor at the University of Technology (UTech) is purely ceremonial, Edward Seaga has decided to break his silence on some of the challenges facing the national university.

"The establishment of UTech gave the right to all the unions to have a seat on the council, so you have about four different staff unions on the council and a couple staff members who link up with the unions because they want to fight for getting promotion for themselves," he told The Gleaner.

According to Seaga, the progress of the university has been blighted because of the attitude of the staff and leadership at the institution.

"A lot of the difficulties come from the fact that everybody there wants promotion but they don't want to do the work ... and what is there now just can't continue to go on," he said.

The UTech chancellor argued that the small number of persons on the teaching staff with terminal degrees is an existential problem for the institution, and has, in large part, been perpetuated by the action of the unions.

"I know the shortcoming of the staff, but the unions have been strident and not always rational," he added.

The stridency of the staff unions has been played out in lack of appointment of a university president two years after the departure of Professor Errol Morrison, who served in the post for seven years.

Professor Ishenkumba Kahwa, of the University of the West Indies, was tipped to take the post, but sources within the Ministry of Education have said his appointment was blocked by the staff unions through their membership on the council. Professor Colin Gyles has been serving as acting president.

The unions also featured heavily in the departure of Morrison after he sought to improve the number of persons with terminal degrees at the university.

"We had started to go out and look for those who were willing to come and join a new thrust, but those who were already there in short order just got jealous and thought that it was a way of marginalising them," Morrison told The Gleaner said.

"But it was aimed at bringing everybody up to standard, but they saw it differently and the unions got involved and things went downhill from there. I wasn't willing to let things remain as they were because if you are taking the place international, then you have to come with some accreditation and people with you of international standing and that is the thrust that was being made."

He added: "I think they misread it completely, thinking we were trying to marginalise them, but we were trying to pull them up. But so be it. There are many visionaries that have been sidelined and I don't mind going down with that group."

Morrison has called for UTech's university council to be restructured.

"That council needs some of the minds such as the ones the prime minister has on his economic growth council so we can now begin to look at academic growth and the professional output of the university," he said.

The staff unions at UTech have said they will respond to questions posed by The Gleaner at a later date.