Holness: 'Get it right' on energy 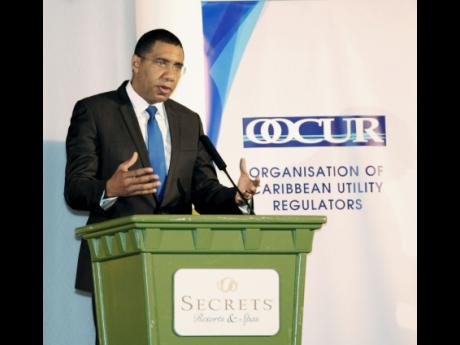 Asserting that "we must get it right", Prime Minister Andrew Holness has urged utility regulators to take seriously their role in helping the Caribbean ease its dependence on oil and embrace technologies and renewables key to energy diversification.

The regulators' role, he said, is linked to the creation of partnerships with investors who want returns, consumers and governments pushing for the economic development of their countries.

Holness was addressing the opening ceremony for the 14 Organisation Of Caribbean Utility Regulators (OOCUR) conference at the Secrets Resorts & Spa in Montego Bay, St James.

A variety of issues are set for discussion over three days by the more than 160 regional and international experts.

However, Holness, noting the importance of energy to the region's development and the current high levels of dependence on oil, made it clear that the issue should be at the top of the agenda.

"Energy is clearly the mission-critical frontier," he said, pointing to the role of Jamaica's Office of Utilities Regulation (OUR) in helping Jamaica introduce liquefied natural gas (LNG) as part of the energy mix.

"The OUR approved the funding for the conversion of the Jamaica Public Service Bogue plant to enable the move from heavy dependence on oil to diversifying to LNG. I applaud the OUR in this regard for being a strong regulator and helping to make this move a reality - to take Jamaica on this new platform. This is a great example of collaboration among Government, regulator, and utility," Holness added.

A shipment of LNG supplies arrived in Jamaica last week Saturday, and in two weeks, is expected to be in full use.

The prime minister emphasised that regulators have to take seriously their role in helping the Caribbean Community implement the Caribbean energy policy that was approved in 2013.

That policy promotes a shift in sustainable energy through increased use of renewable energy sources and energy efficiency, among other things.

"OOCUR, you have your work cut out for you as not only is Jamaica focused on diversifying its energy mix, so, too, is CARICOM, and we must get it right in the region. Access to affordable energy is a necessary requirement for addressing sustainable development in the region," Holness said.

He also argued that while there is need for partnership with all stakeholders in the provision of utilities, the providers must insist on self-regulation to ensure that standards are upheld and service delivery is at a high quality.

Earlier, Albert Gordon, chairman of OOCUR, said the conference was happening at a time when regulation was becoming more important for sustainable development.

The conference schedule has placed heavy emphasis on renewable energy and investment.

Jamaica and many other small-island states of the Caribbean are heavy importers of oil, which increases their vulnerabilities to external shocks such as sharp oil price rises. Except for Trinidad and Tobago, the only net exporter of oil and natural gas, all other Caribbean countries are net oil importers.

"For importers other than Suriname, around 87 per cent of primary energy consumed is in the form of imported petroleum products. Imports are mostly diesel fuel for electricity generation, gasolene for transportation, and liquefied petroleum gas used as cooking gas in households," experts noted in a paper titled 'Caribbean Energy: Macro-Related Challenges' released in March by the International Monetary Fund.

This, they said, has led to consistently high electricity rates, which affects the competitiveness and development of CARICOM nations.