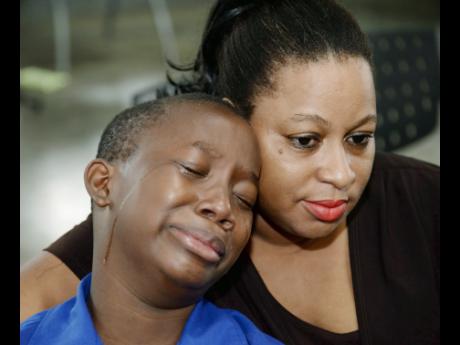 Jermaine Barnaby
Tears flow down the cheek of second-former Jaleel Powell, a friend of Nicholas Francis, as he is comforted by his mom at Jamaica College in St Andrew yesterday. 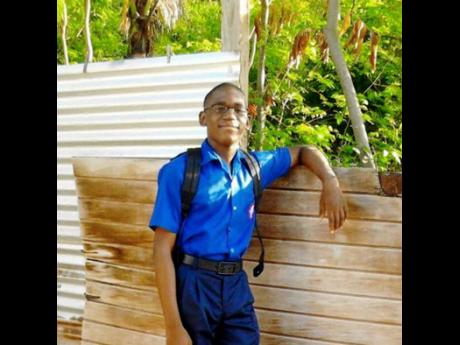 When Xavier Francis, father of slain Jamaica College (JC) student Nicholas Francis, gave him the location of his lunch money before he headed off to school on Wednesday morning, he had not even the slightest thought that that would have been the last time he would see his only child alive.

"The last time I spoke to him was in the morning when he was leaving, and he asked me for his lunch money. I had some money on the dresser and I told him to take his lunch money out of it. He took it up and left," Francis told The Gleaner.

Nicholas was killed by a man attempting to rob him on a Coaster bus near the JC school gate on Old Hope Road in St Andrew.

The police yesterday said Quacie Hart, of an unknown address, was wanted for the murder of the 14-year-old student.

Hart was asked to immediately turn himself in to the St Andrew Central Police Station.

Yesterday, Francis said he had not been feeling well all day Wednesday, and as a result, decided to stay home.

That evening, the acting principal of JC, Wayne Robinson, called Francis to inform him that Nicholas was at the University Hospital of the West Indies.

"The principal called me from JC and told me that my son had a confrontation with somebody on a bus and he was rushed to the University Hospital and I must go up there now because he was on his way up there. I was at home when I got the phone call. I was sleeping when the phone rang. I was not feeling good," Francis said.

"I never knew he died at that time. I just heard that he was rushed there. In my assumption, it was something simple. When I was on my way up there, I was at Matilda's Corner, they called me and told me that he died," he said.

Reports surfacing since the incident suggest that the perpetrator was unsuccessful in an attempt to take Nicholas' cell phone. His father told The Gleaner that he (the father) now has the cell phone in his possession.

"When he was robbing him, he defended himself at that time at the back of the bus. The man took his bag from him, and based on what I am hearing now, the man lured him to the front and then stabbed him and then ran away. They never got his phone; they took his watch off his hand. They never got the phone because we have the phone now," he said.

"Heartbroken" is how he best described his feelings about his son's killing.

Francis said that Nicholas' mother had not been coping well with his death.

"His Mommy not doing good. I had to carry her to the doctor last night (Wednesday) to give her sedative and they gave her some other medication. The family [is] not taking it good," Francis said.

Nicholas was one of two children for his mother.

Francis remembers his son as a brilliant individual, loved and cared for by all.

"He was a brilliant youth, you know. Everybody you talk to says he doesn't give trouble. He comes home on time. He does his work. He goes to church on Sundays. He was an altar boy, [and] he was pleasant."

Yesterday, the police said they were appealing to passengers who were on the bus when the incident took place to report any information that might aid the ongoing investigation.

The JC Parent-Teacher Association said it was organising a one-hour (7-8 a.m.) peaceful demonstration for next Monday outside of the school, from the front gate to the entrance of Ravinia.

"We want all parents to support and come dressed in black," said PTA President Errol Holmes.

"We will speak to the Government about reconsidering a student transportation system, and our board chair will launch a reward fund of $50,000 towards the capture and conviction of Nicholas' killer."

Holmes added: "We hope others will match it. We want to send a message to Jamaica that our children are our future and we must protect, encourage, and nurture them."